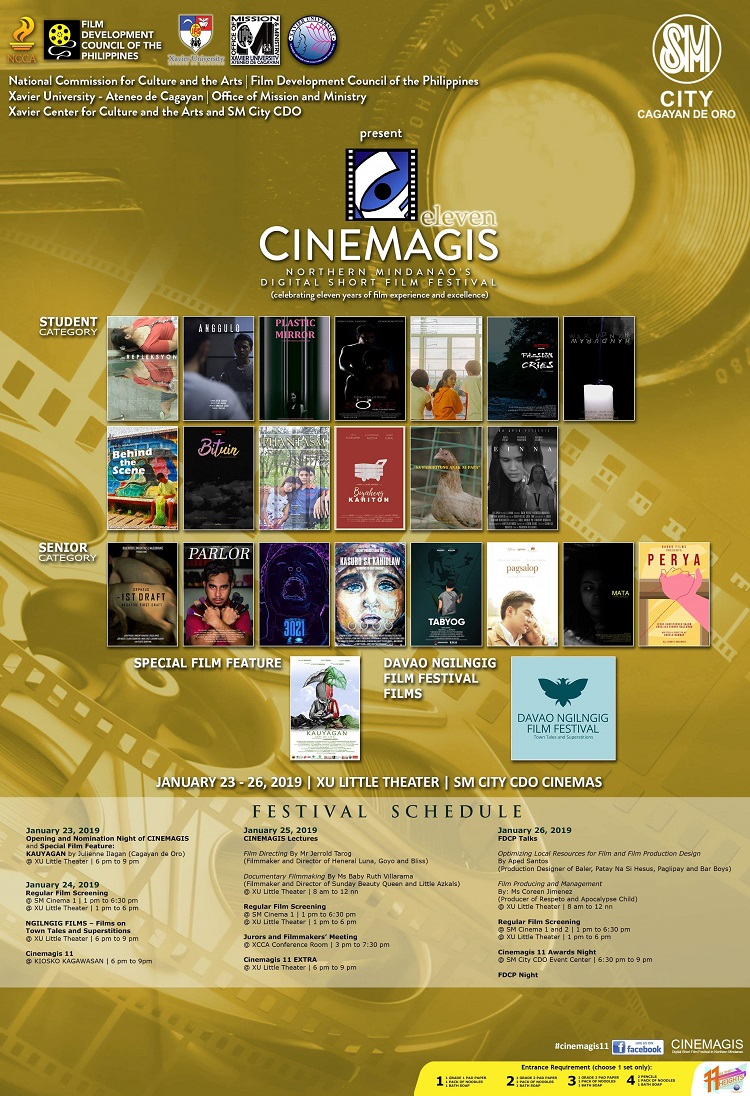 A year after celebrating its 10th anniversary, Cinemagis continues its advocacy as an artistic and cinematic avenue to promote and showcase the vibrant film industry in Northern Mindanao (NorMin).

This year, the digital short film festival has accumulated over 21 entries by filmmakers from Cagayan de Oro City, Iligan City, Ozamiz City, and even stemming as far as the Caraga Administrative Region. Eight of these have made it in the senior or professional category, while 13 films will compete in the student category.

Cinemagis, a portmanteau of the terms, “cine” (which relates to the art of filmmaking) and “magis” (which defines the Ignatian principle of doing one’s best beyond expectation), has been one of the ongoing legacies of the Xavier Center for Culture and the Arts (XCCA) of Xavier University - Ateneo de Cagayan.

Supported by the National Commission for Culture and the Arts (NCCA) and the Film Development Council of the Philippines (FDCP), Cinemagis has brandished its purpose as an annual film festival that trajects local filmmakers with their craft towards cinematic achievement.

In the upcoming event slated from January 23 to 26, some familiar names return to the Cinemagis screen to showcase their narratives besides competing for promising awards.

A year of returnees

Among the filmmakers in the senior category, five had participated in last year’s festival. Angelo Miguel Dabbay takes on a more dramatic approach to his narrative this year in “Perya” in contrast to his comedic, “Kabuang ug Kasakit” last year.

Tat Soriano once again tackles romance in “Pagsalop” which attempts to stir the heartstrings just like his previous films, “Panamilit” in 2014 and “Good Night,” his entry last year.

Kenneth Sabijon, whose short film, “Ang Batang Mandirigma” won Best Film in Villanueva’s first Kaadlawan Film Festival, decides to dig into the conflict between the aspiration for education and the consequence of partaking a revolutionary cause in “Kasubo sa Kahidlan (Sorrows of Deep Longing).”

Another poignant tale is that of Adrian Rey Manapil whose “Parlor” explores the mysteries of a family’s past.

Meanwhile, Edmund Telmo, who earned the best film last year for his drama, “Redempsyon,” ventures into a dystopian sci-fi realm in “3021.” Rarely has a concept that gauges on the extinction of the human race been done for a local film and submitted to Cinemagis. Telmo also won Best Film in the student category in 2017 with “Moru: No Man’s Land.”

As Dabbay, Soriano, Sabijon, Manapil, and Telmo had participated last year, Orpheus Nery, who was Best Director for his Greek mythology-inspired biopic, “Orpheus” two years ago, joins the roster with his “-1st Draft” (pronounced as negative first draft). This would be Nery’s fourth film in Cinemagis following “En Pace” in 2015, “The Barrel” in 2016, and “Orpheus” in 2017.

Rachel Ann Dolor’s psychological thriller “Mata” and Junlou Tordoz’s drama “Tabyog” complete the list for the senior category. Tordoz comes from Caraga and has also organized a faculty symposium about the future of Philippine cinema in his hometown.

Entries among the senior category may have been crafted by experienced and aspiring filmmakers and their crew, but new voices and images emerge in the student category.

Diversity in the narratives

Diversifying the narratives is also one of the film festival’s annual aims. The student category included new voices in its list of entries this year, with narratives ranging from social issues, mental health problems, the tragedy of internal conflict, and relevant themes for sex education.

Student filmmakers from MSU-IIT hailed that for over the years a streak of their films that have garnered awards in the film festival. This year, Information Systems major Norriell Joyce Dalman and Nursing student Angielle Schnaider set their expectations, along with Christian Alan Toring.

Dalman’s “Anggulo” presents the struggle of a war refugee as he goes through an adjustment phase after he survived from the tragic Marawi siege. Schnaider’s “Handuraw” attempts to follow a main character’s unlikely journey home. Toring, who joins the ranks of Telmo and the many who have already participated in years prior, draws a poignant tale about a son’s love for his mother with “Sa Paboritong Anak ni Papa.”

Also returning is Earl Hendrix Reyes (or Drix Reyes) from La Salle University in Ozamiz City with “A Passion of Cries,” identifying the causes of sanity in the remaining members of a nuclear family. Jun Vincent Abao, who also hails from the same university, ignites the narrative about the main character who talks about his past in “Bituin”

Within CDO, Liceo de Cagayan University’s Allan Jay Jamin traces the lines that bind a relationship in “Phantasm,” while Cagayan de Oro College’s Rodiell Veloso examines the cause and effects of a sexually transmitted disease in “Sore.”

Chuck Labio and Julmarie Eliza Dela Torre, high school students from the Lapasan National High School - Special Program in the Arts, and also the youngest among the filmmakers this year, provide insight about how poverty can turn anyone a victim with “Behind the Scene.”

Perhaps the farthest filmmaker among the contenders this year comes from the Caraga Region. Along with Tordos, Mary Clair Amora, a senior high student from Saint Michael College of Caraga whose film this year, “Biyaheng Kariton,” claims a spot. Her film has also been nominated in the student film category of the 16th Mindanao Film Festival.

For ten and more years

Following a celebratory milestone by reaching a decade last year, the Cinemagis Digital Short Film Festival in Northern Mindanao looks forward to 10 more years in cultivating and nurturing the creative scene in the region, particularly in local cinema.

This year, the film festival has invited notable names in the field to judge and to provide lectures. Among them are the prolific Baby Ruth Villarama and Jerrold Tarog.

Villarama was famous for directing “Sunday Beauty Queen,” the 2016 documentary which had been recognized by the Metro Manila Film Festival as best film that year. Tarog is also known for his educational and daring biopics about the arguable Filipino heroes with the films, “Heneral Luna” in 2015 and its sequel, “Goyo,” released last year.

Tarog will share his experiences in film directing and will advise filmmakers on how it works. Villarama, on the other hand, will explain the essence and relevance of documentary filmmaking in their joined talks on January 25 at the XU Little Theater (XULT).

The following day, FDCP will also provide lectures at the XULT with Aped Santos, known for his set designs used by critically acclaimed films like “Batad: Sa Paang Palay” in 2006, the MMFF Best Picture “Baler” in 2008, and “Bambati” in 2015. Along with him, Coreen “Monster” Jimenez, known for producing cinematic hits such as “Respeto” in 2017, will also be speaking about her expertise in film.

Headed by XCCA director Hobart Savior as the festival director, the film festival will commence on the evening of January 23 at the XULT wherein “Kauyagan,” a film by CDO-based filmmaker Julienne Ilagan will be shown. The film is also known for being an official entry to last year’s ToFarm Film Festival.

Filmmaker from Davao City, Bagane Fiola, notable for his daring “Baboy Halas” film about an indigenous family encountering unusual changes in their environment, will also be returning as one of the judges.

As annually held, the XULT and SM Cagayan de Oro City Cinema 1 still remain the venues for the screening of the films from January 24 to 26. On the last day, winners will be announced and awards will be given at the SM City Event Center.

With entries that exemplify diversity this year, Cinemagis 2019 is set to hone more talents for the promising and growing film culture in Northern Mindanao.∎