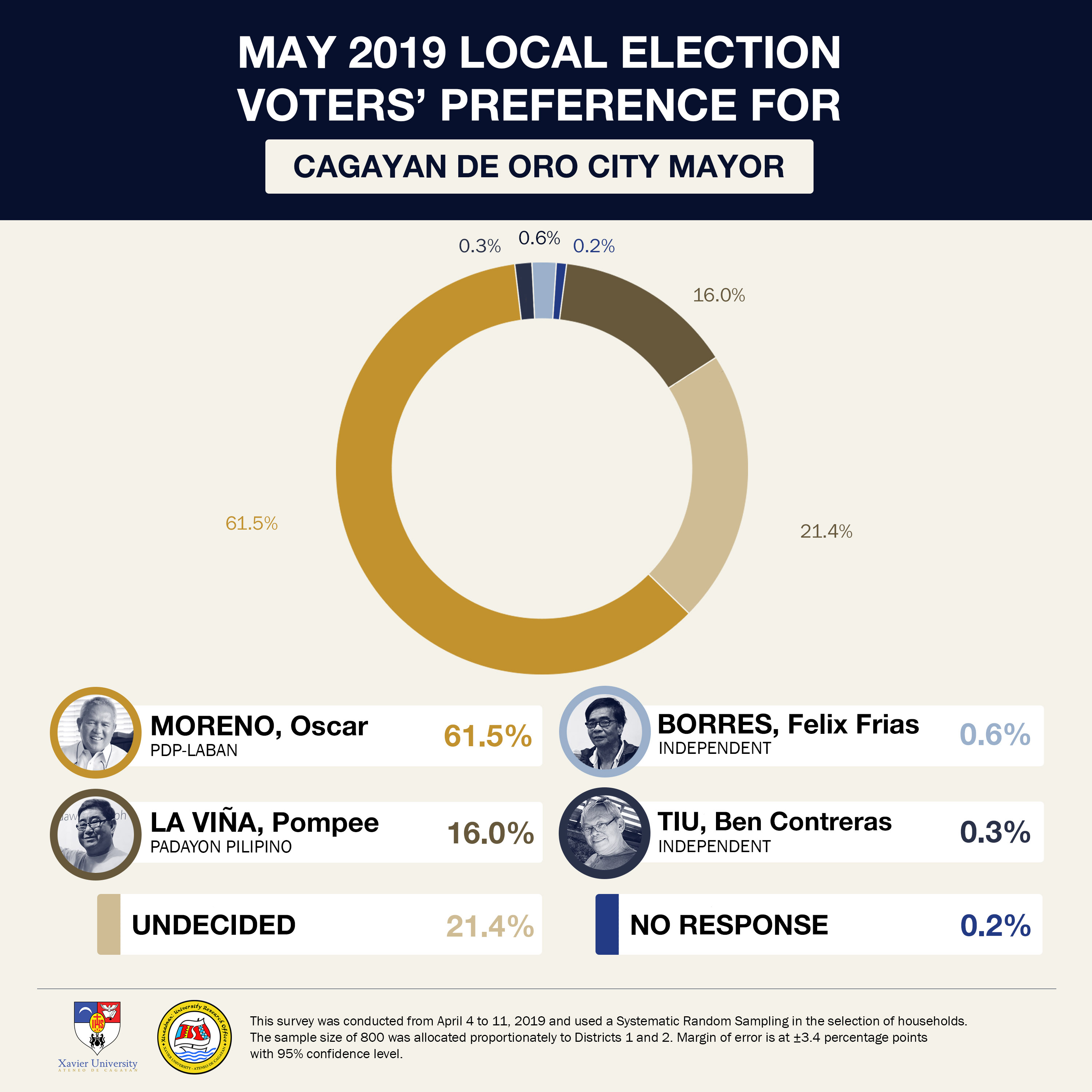 The poll was conducted among 800 registered voters in the city from April 4 to 11, a week after the start of the campaign period for the local elections.

Moreno has a voter preference of 61.5% and a statistical ranking of first place. Behind in second place is La Viña with a voter preference of 16.0%. Independent candidates Felix Frias Borres stood at 0.6 %, while Ben Contreras Tiu at 0.3%. Undecided voters accounted for 21.4%, while 0.2% had no response. The margin of error is at ±3.4 percentage points with 95% confidence level. 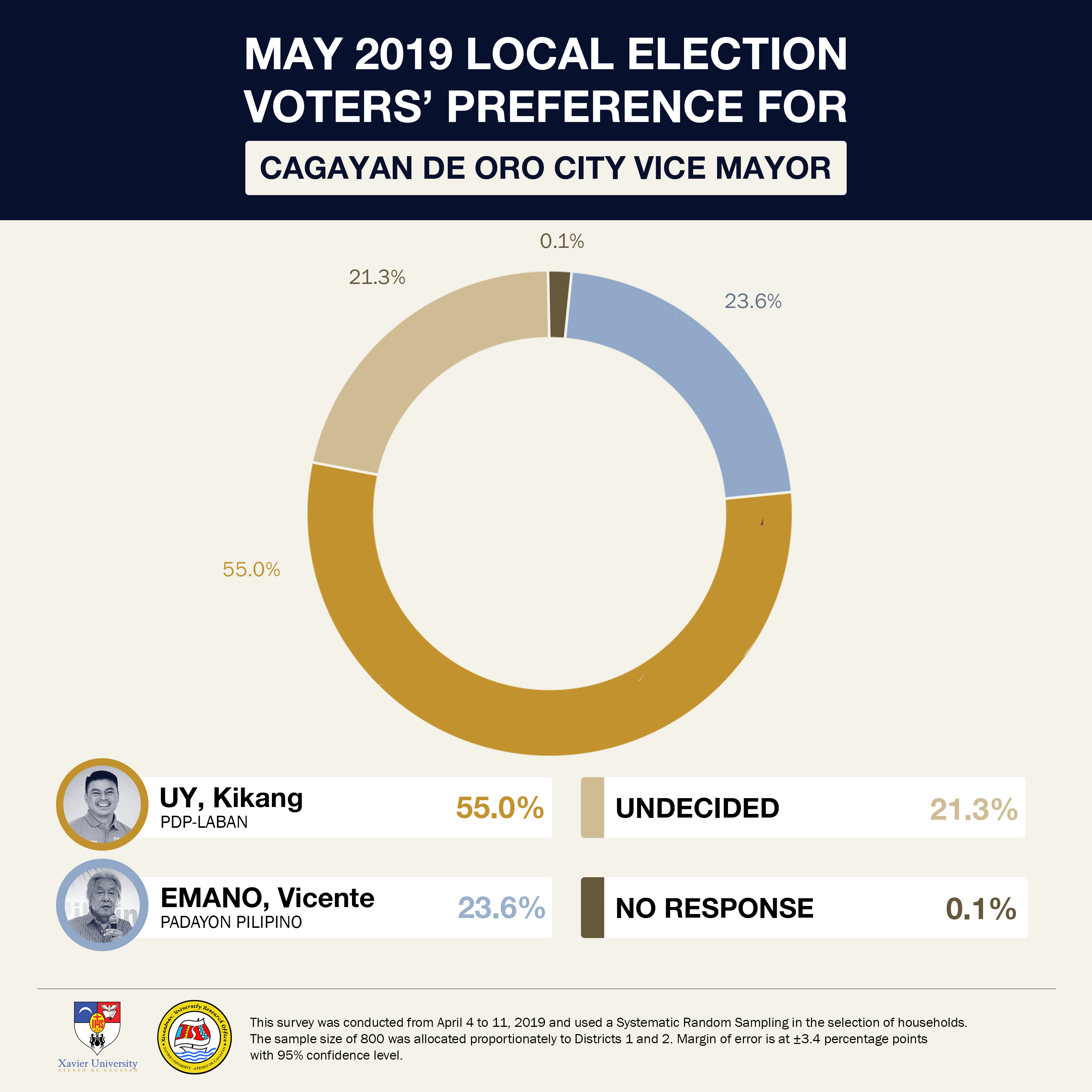 Voters’ preference for vice mayor puts Moreno’s running mate Kikang Uy (PDP-Laban) on top with 55.0%, followed by former mayor Vicente Emano (Padayon Pilipino) with 23.6%. Undecided voters accounted for 21.3%, while 0.1% had no response. The margin of error is at ±3.4 percentage points with 95% confidence level.

Dominance in the city council

From District 1, PDP-Laban candidates stood out in the race for the 8 (per district) of the 16 seats in the city council. Of the 13 contenders with a statistical chance of winning, 8 are from the ruling party while four are from Padayon Pilipino and one from Partido Federal ng Pilipinas (PFP).

The margin of error is at ±4.9 percentage points with 95% confidence level. 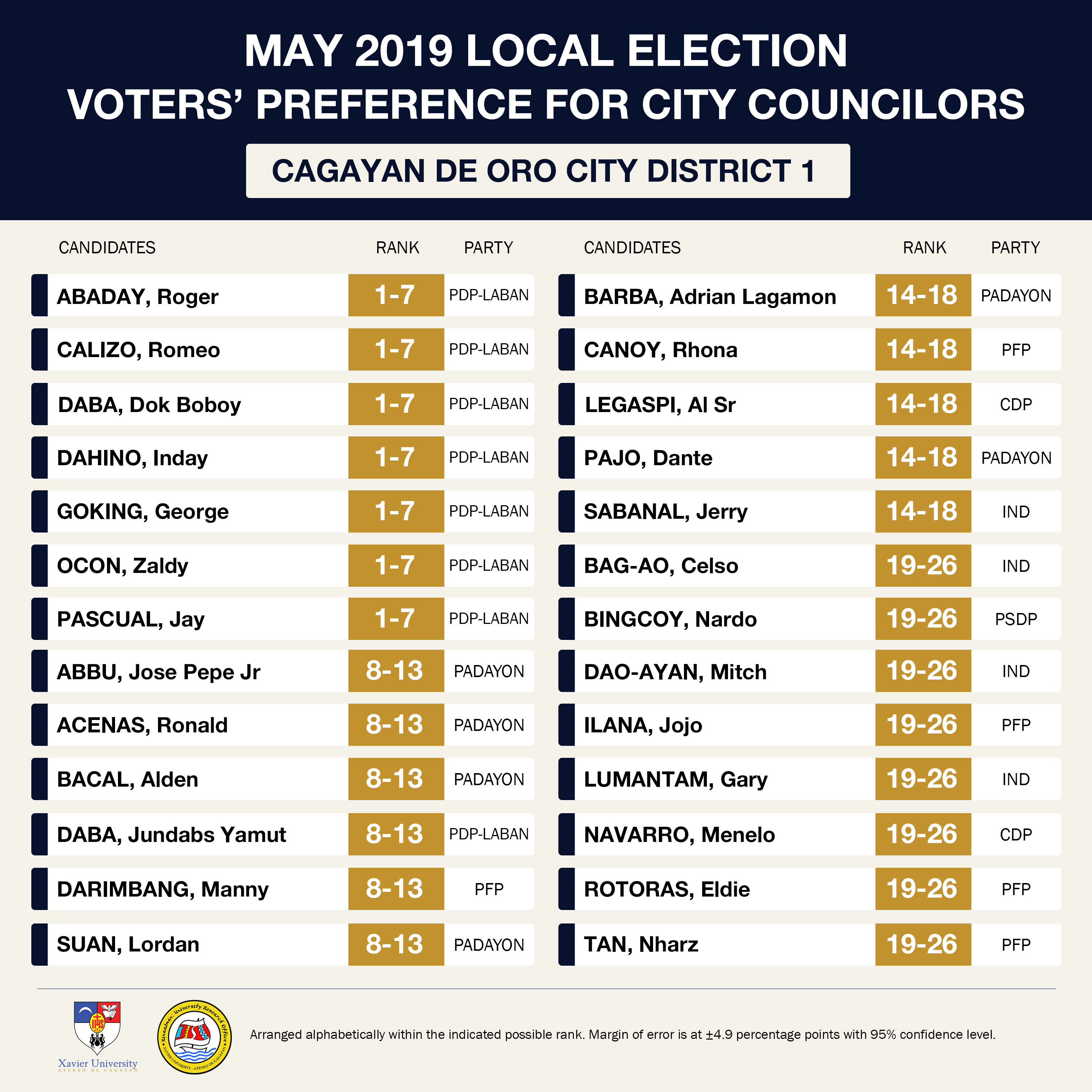 Voters in the 2nd District also preferred PDP-Laban bets in the city council. Of the 13 candidates with a statistical chance of winning, seven are running under PDP-Laban, while four are from Padayon Pilipino and two are from Centrist Democratic Party (CDP).

The margin of error is at ±4.7 percentage points with 95% confidence level.

A total of 49 candidates (26 from the First District and 23 from the Second District) are gunning for 16 coveted spots in the city council. 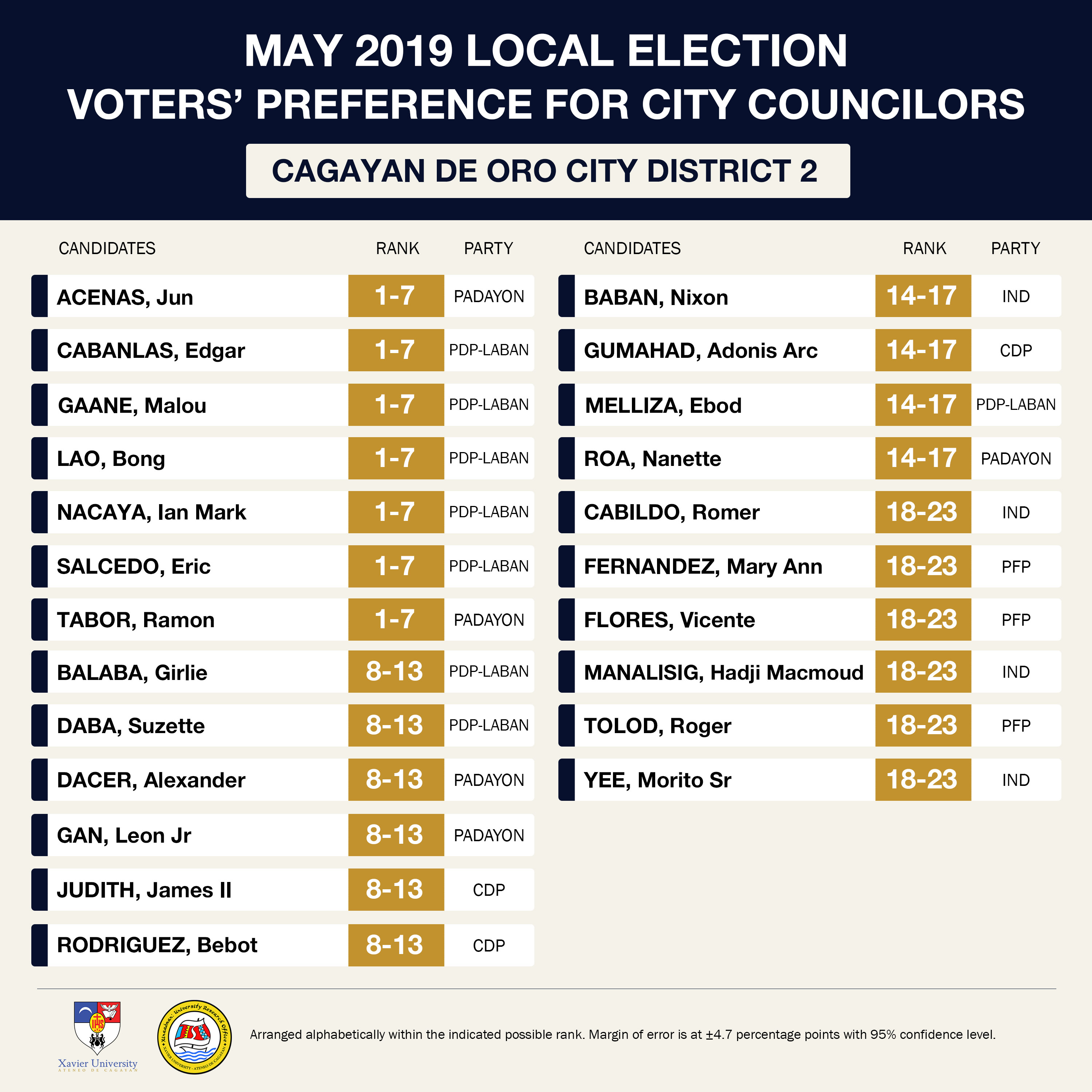 In District 1, incumbent Rolando Uy (PDP-Laban) dominates the congressional race with a voter preference of 66.1%, followed by Caesar Ian Acenas (Padayon Pilipino) with 16.4% and Gil Banaag (PFP) with 1.9%. Undecided voters were at 15.6%. The margin of error is at ±4.7 percentage points with 95% confidence level. 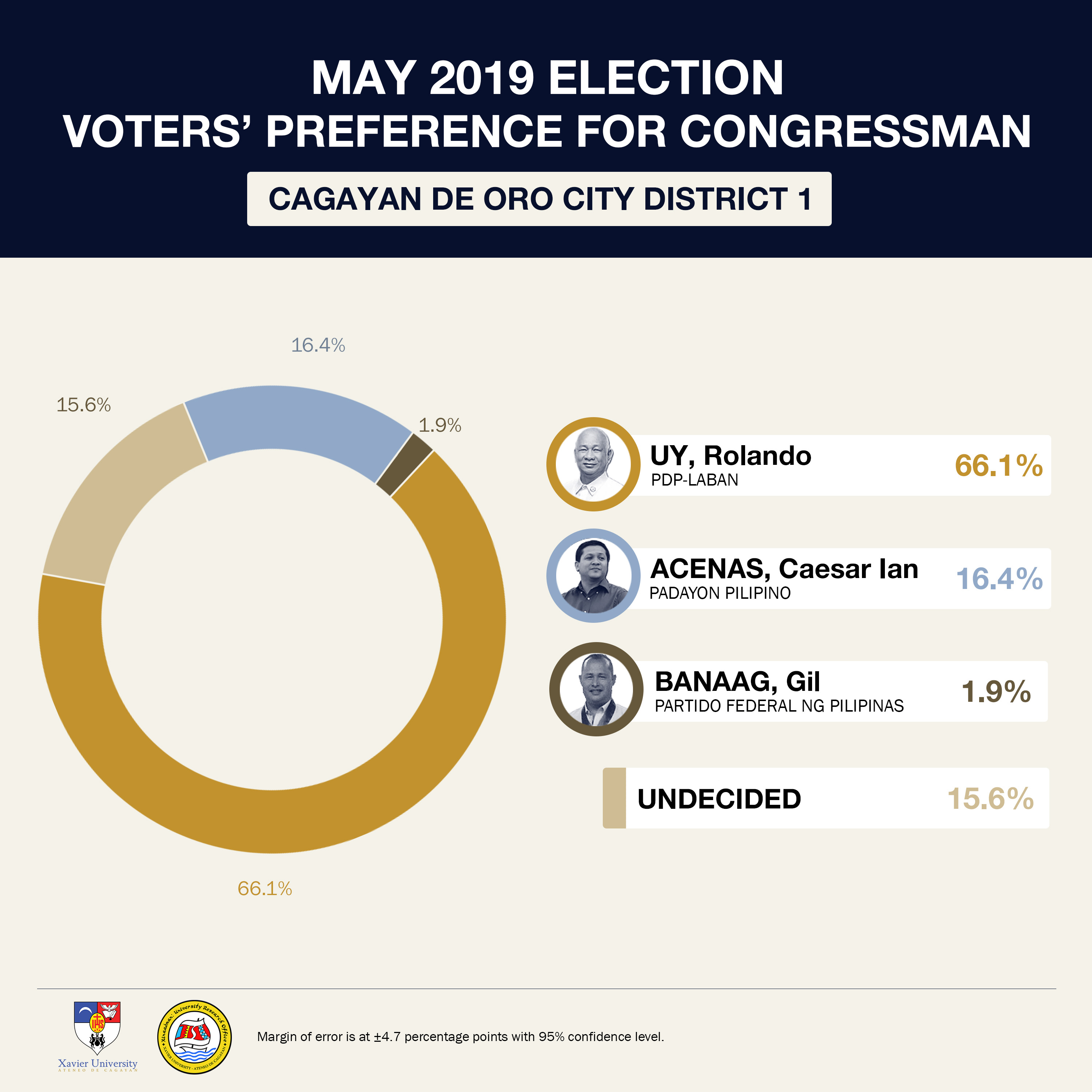 In District 2, Rufus Rodriguez (CDP) has the support of 59.2% of the registered voters. Trailing behind Rodriguez were Alam Lim (PDP-Laban) with 19.4% and Roger Villazorda (PFP) with 0.9%. Only 15.9% of the voters were undecided, while 3.1% had no response as to their preference for a congressman. The margin of error is at ±4.7 percentage points with 95% confidence level. 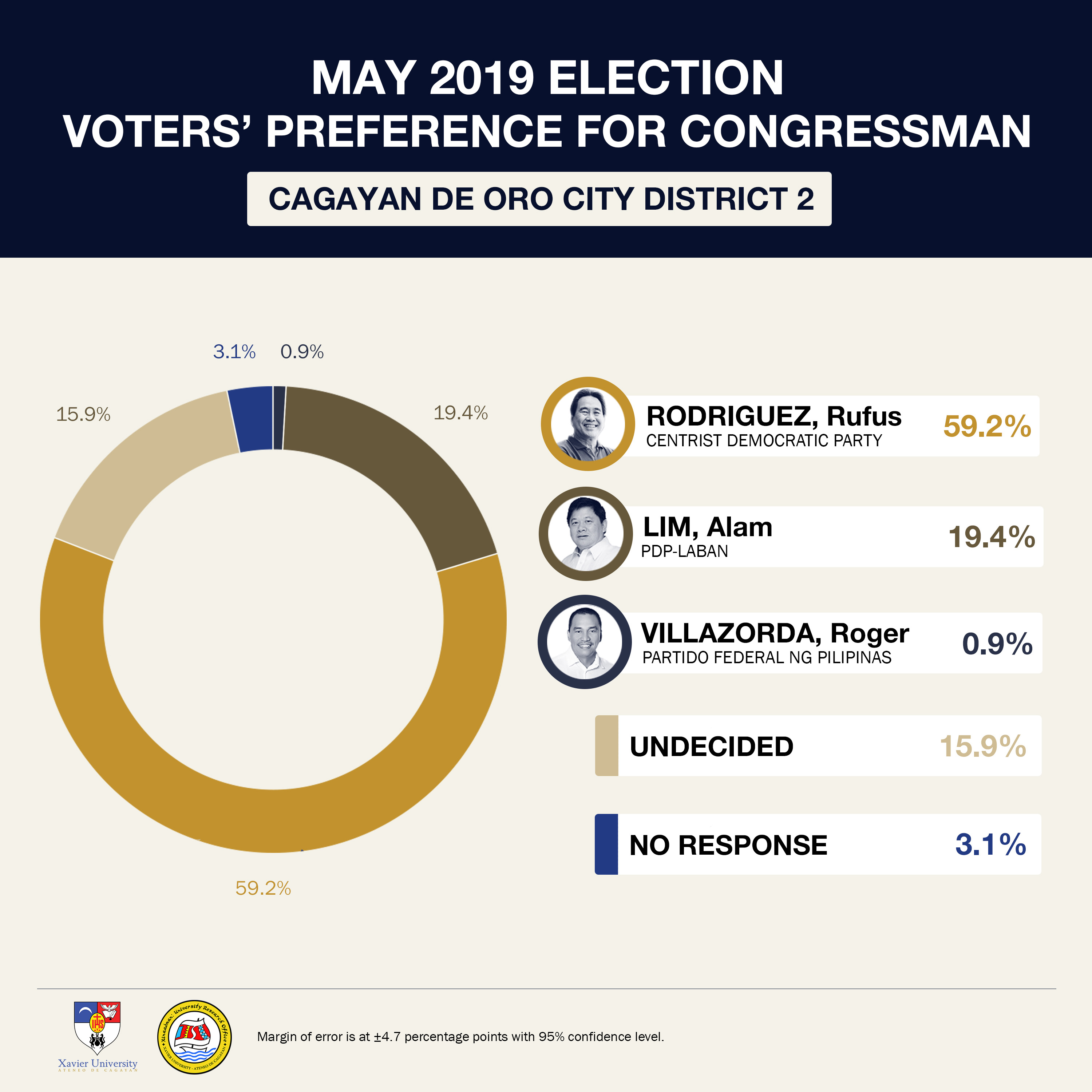 Employment and livelihood or income-generating projects surfaced as the top Economic Issues.

For Peace and Order, the top concerns identified were (1) illegal drugs, (2) illegal parking of trucks and other vehicles, (3) traffic jam, and (4) theft and robbery.

Respondents named canals and drainage as the top issues in Basic Services, followed by lack of water supply, then roads.

The top three Environmental Concerns were (1) garbage disposal or waste management, followed by (2) sanitation and (3) cleanliness of seashores, rivers, and/or creeks.

The XU-KURO survey used a systematic random sampling in the selection of households. The sample size of 800 was allocated proportionately to Districts 1 and 2.

As in all past poll surveys by KURO, this research was fully funded by Xavier University - Ateneo de Cagayan.

A second survey will be conducted by KURO closer to the election date, with an expected release date on the first week of May. 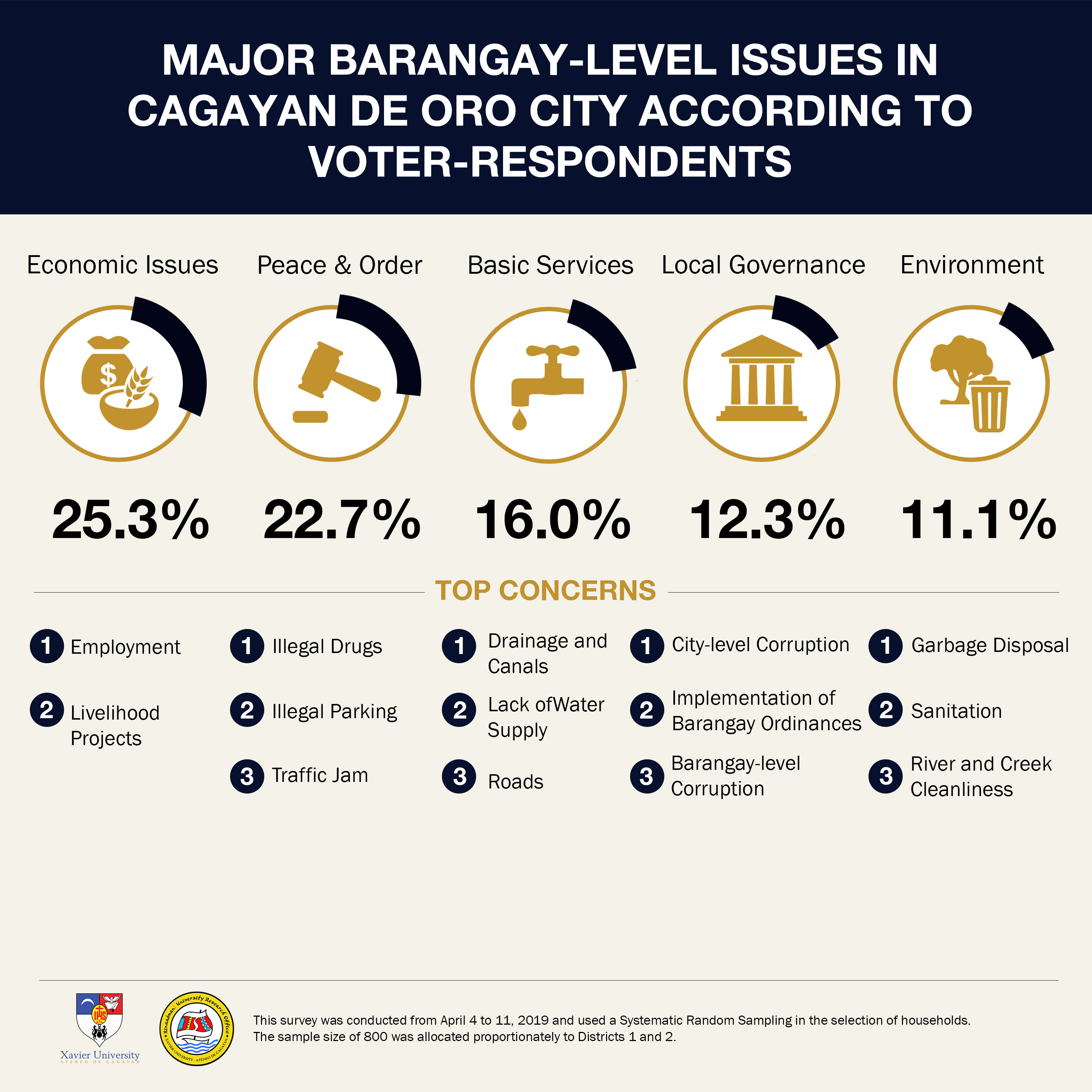 In an April 1 memo to the academic community, Xavier Ateneo president Fr Roberto C Yap SJ iterated,  “[The university] participates in a non-partisan way in electoral processes to contribute to the strengthening of democratic and patriotic values as enshrined in the Philippine Constitution.”

Xavier Ateneo aligns with the advocacy for Clean, Honest, Accurate, Meaningful, and Peaceful (CHAMP) elections, and enjoins everyone in the community to practice the Ignatian value of discernment in choosing candidates running for elective posts in government.

“Xavier Ateneo will maintain its non-partisan stand to facilitate objective and critical thinking and engagement for the academic community,” Yap said. “We will actively support electoral programs and activities primarily as convener of the multisectoral LIHUK 2019 movement.”∎