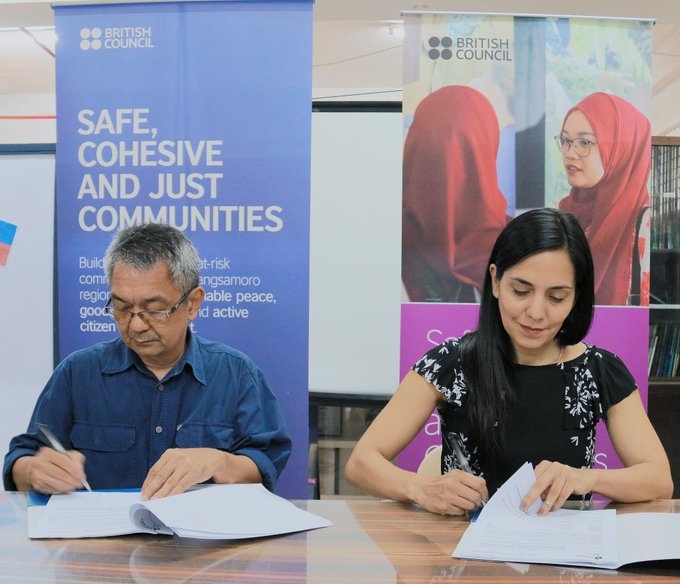 “Today, with Xavier University’s partnership, we are taking the peacebuilding work of the British Council in the Philippines to a new level by introducing two new components to SCJC: Art of Peace and Transforming Local Peace and Order Councils,” Prudencio said.

The project uses arts and culture education to “complement institutional and structural approaches to peacebuilding programming, in areas such as confidence building, skills training, self-expression, and intergroup understanding and tolerance.”

Prudencio added: “Arts and culture are regarded as a more neutral ground for mutual understanding than explicit peacebuilding activities because they are able to bring people from different groups together around a shared interest and goal, rather than around issues related to the conflict. They also provide a form of expression and a creative reflection.”

In April this year, the British Council published a report that examined the value of culture in post-conflict recovery. The study drew on the experiences of Rwanda, Colombia, and Syria, highlighting the contribution of arts and cultural programs in post-conflict communities, through therapy, reconciliation, and civil society strengthening.

“We also want to further understand the role of culture in promoting resilience in conflict-affected areas, and use this research to develop new theories of change,” Prudencio said.

Xavier Ateneo was chosen by the British Council as a partner for this project because of the university’s “facilitation of interfaith dialogues, promotion of peace education, leadership in education training for Muslim teachers and Islamic values, and integration of culture and development in your social outreach programmes.”

Ravanera believes that the arts can bring people together and result in a deeper cultural understanding. He also regarded this project as an opportunity to work with local governments and the Bangsamoro community.

“Our experiences in Marawi, particularly with the internally displaced people (IDPs), along with our different peacebuilding programs will help us achieve the goals of this project,” Ravanera said.

“We hope to serve the communities better and engage with them through arts and cultural education."

During the partnership signing, Ravanera was joined by a number of deans, directors, and unit heads who form part of the SCJC project.

“We recognise your efforts working closely with local governments and community stakeholders and your creative approaches to peacebuilding through strategic communication and student-led campaigns that provided safe spaces for young people,” Prudencio said.

As partners for peacebuilding, the two institutions look forward to working towards sustainable peace, good governance, and active citizen engagement for a more peaceful, secure, and resilient Bangsamoro.∎