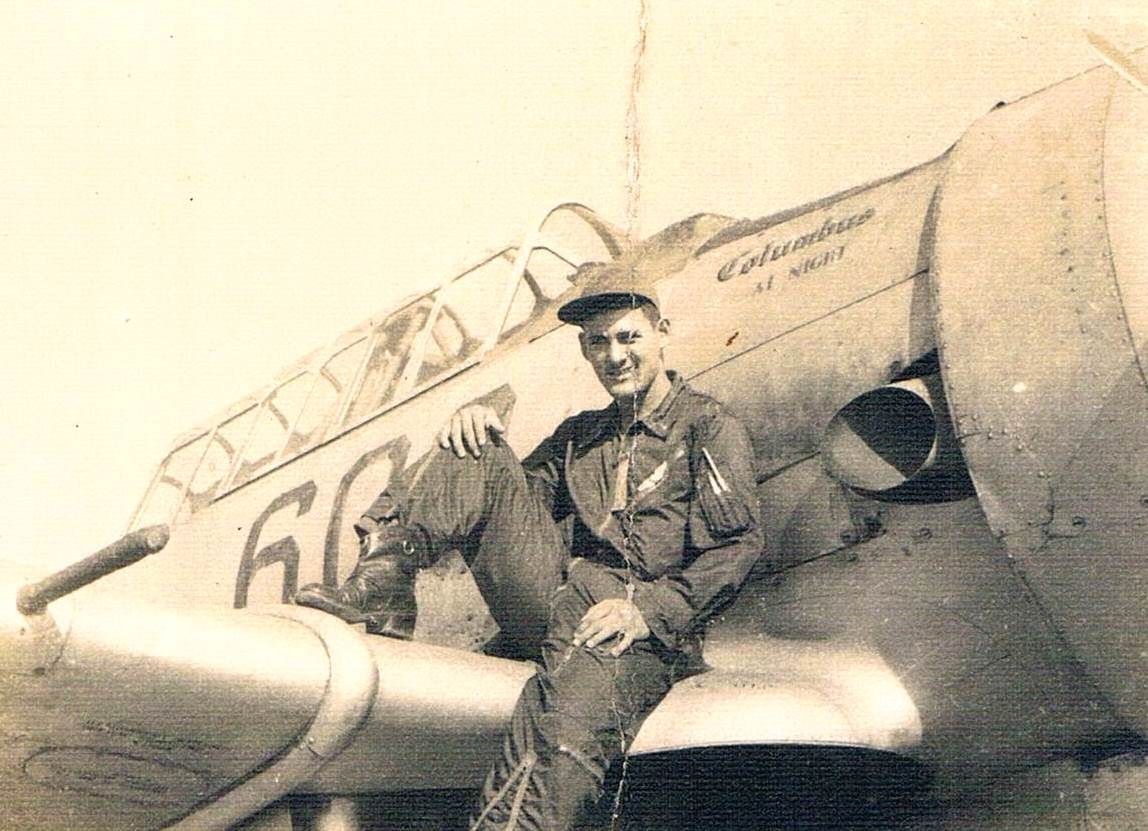 Except perhaps for his relatives, very few alumni of Xavier University - Ateneo de Cagayan (Xavier Ateneo) today remember one of the greatest basketball players to come out of their alma mater.

Antonio Ma. "Choly" Gaston, (HS '49 BS '53) originally came from their Hacienda Sta. Rosalia in Manapla, Negros Occidental.  He is related to the family of the former mayor of Cagayan de Oro and Misamis Oriental Governor Segundo Gaston and still has relatives living in Cagayan de Oro until today.

“He is mom’s second cousin, the son of the owner of Hacienda Sta. Rosalia, where the touristy Chapel of the Cartwheels is located,” said his niece Connie Gaston Falcon-Lahorra. “That’s the venue of our reunions in Manapla, Negros Occidental. He is also the elder brother of Msgr. Guillermo ‘GG’ Gaston.”

Choly (for some reason, spelled Chole in the Ateneo de Manila sports archives) as he was known to everyone, was born in 1930. He played high school varsity basketball in the then Ateneo de Cagayan in 1946-1948.

“Tito Choly and his brother Tito Toy (Victor) both studied in Xavier and played basketball for the school because this was right after the war and they could not go to Manila,” recalls his niece Mayee Fabregas.

When he moved to Ateneo de Manila for his college education he was promptly recruited into the Blue Eagles Senior Varsity where his fiery style of playing earned him the moniker “Cagayan Cyclone.”

As described by Rick Olivares in his article “Post War Blues II  The Legend of Moro, Choly, and the Quest for the Holy Grail of Collegiate Sports in his blog “Bleacher’s Brew”,  Choly who was all of 5’4” was team captain of a vertically challenged 1952 AdM Blue Eagles starters featuring Oscar Battalones and the 5’5” Freddie Campos with Ole Orbeta as the tallest Blue Eagle at 5’11.

“The Blue Eagles were built for speed and fast and furious excitement. They were the Ginebra San Miguel of their time for their popularity extended beyond the gates of Ateneo’s Padre Faura campus where its perimeter was still littered with crosses from the war dead,” Olivares wrote. 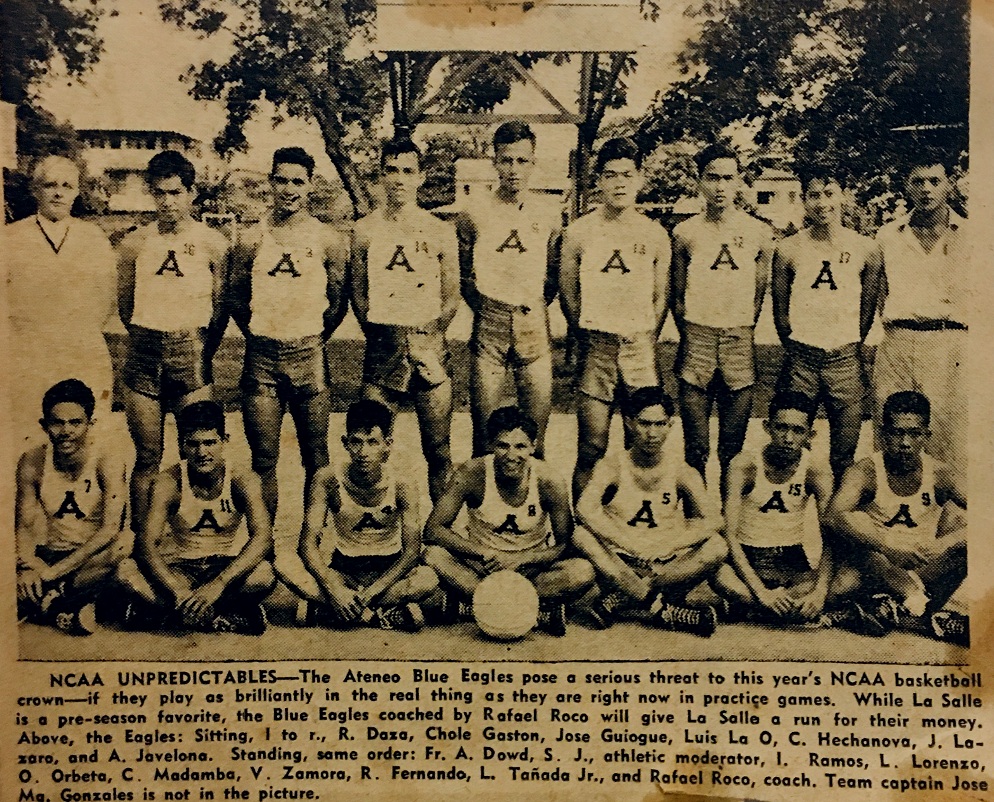 Choly Gaston with the Ateneo de Manila Blue Eagles circa 1950 with Choly Gaston (#11 sitting, second from left). Clipping courtesy of the Gaston Family.

In the late 1950s, the sports press started referring to the team captain of the Ateneo men's varsity basketball team as the King Eagle. The sports scribes got this name from the school's fighting song, Blue Eagle - The King, which was sang by the Ateneo gallery during the games when the Blue Eagles were still playing in the NCAA but has now been revived as the Blue Eagles fight song sung at the start of their every game at the UAAP.

Edgardo "Ed" Ocampo of the back-to-back 1957 and 1958 NCAA champions Ateneo Blue Eagle team was the first team captain to be called King Eagle.

Choly became the ninth of that illustrious line of players to carry the moniker and he did not disappoint, helping carry the team to the NCAA championship in 1952.

"Even during those early days of basketball, height was already might. Imagine then the towering La Salle Green Archers with 4/5 of their starting unit of Martin Urra, Tony Banggoy (brother of San Beda Red Lion Lito Banggoy), Ramoncito Campos, and Juan Muñoz who all stood at least six feet tall (guard Alex Montilla was the only a shade or two less)," Olivares wrote. 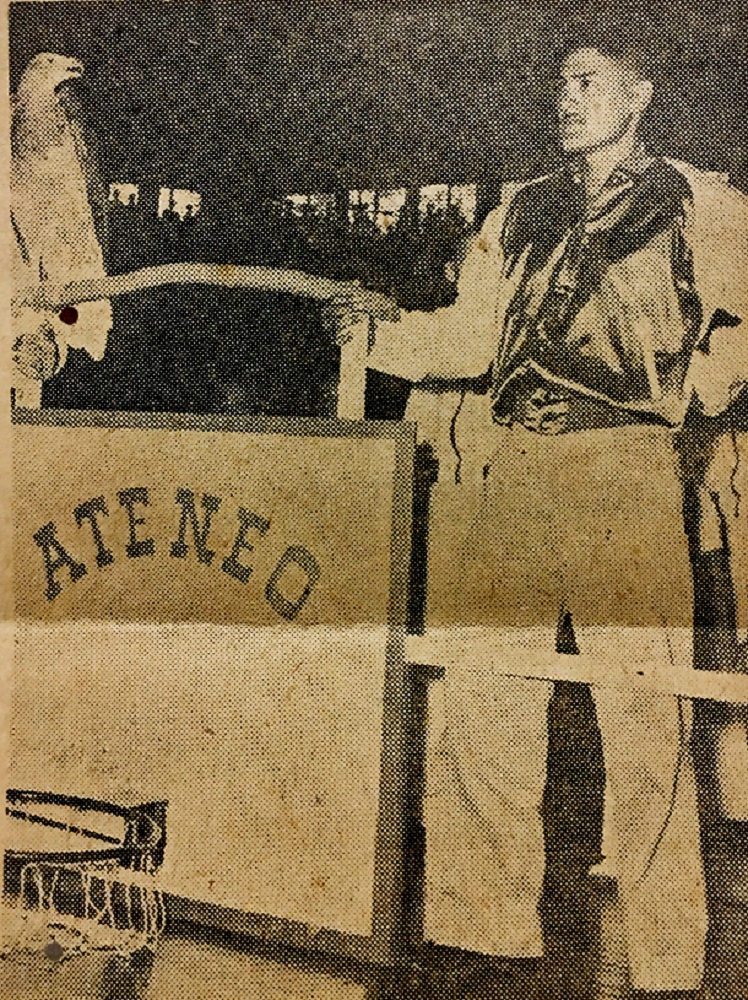 Choly Gaston with a live eagle as the team mascot when the Blue Eagles were still playing in the NCAA. Clipping courtesy of the  Gaston Family. The school used to have live eagles as pets in the former Padre Faura campus and later on at the Grade School campus in Loyola Heights. A live eagle would lead the men's varsity basketball team at the start of a game in the NCAA as the team entered the court for their warm-up while the school band played the Ateneo fight song, "Blue Eagle – The King". Ateneo adopted the Blue Eagle as its symbol during the 1930s, and had a live eagle accompany the basketball team. The eagle suggested a "high-flying" basketball team that would "sweep the field away" as a dominating force, and took its colors from those of the school (Lamberto Avellana, On Wings of Blue: booklet of Ateneo traditions, songs, and cheers published in the 1930s, reprinted in 1950s).

"Gaston, dubbed “The Cagayan Cyclone” (he was actually from Negros but studied at both the Ateneo De Cagayan and Ateneo De Manila) by sportscaster and sportswriter Willie Hernandez, was a pest on the court.”

“Choly not only inherited jersey #11 from brother-in-law Baby Dalupan, but picked up from where he left off with a hellacious defense.”

“No lead was safe when Choly was on the court. If a player wasn’t too careful with the spheroid, the next sight he saw was Gaston hightailing it to the opposite end for a two-handed lay-up off the backboard." 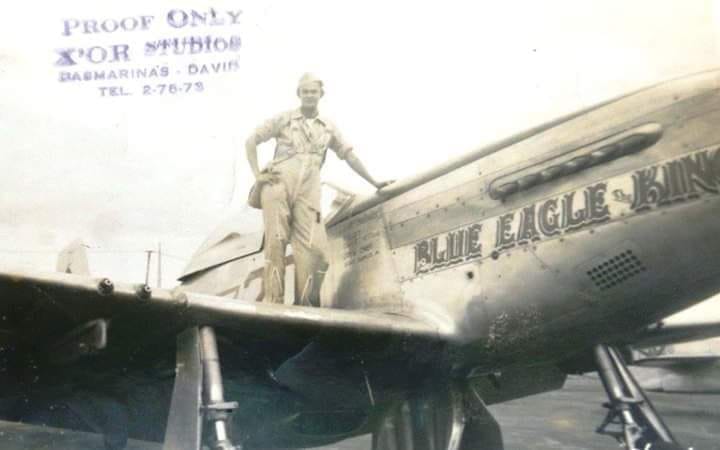 "During an exhibition game against the world-famous Harlem Globetrotters at the Rizal Memorial Coliseum, hardcourt wizard Marques Haynes asked for a volunteer from both Ateneo and NU to strip him of the ball.”

“Haynes’ was acclaimed as the world’s best dribbler and taking the ball away seemed daunting if not the improbable task for anyone. NU’s Tony Villamor went first and was toyed around by the dexterous skills of the Globetrotter.”

“When it was Gaston’s turn, the people who had packed the coliseum to the rafters began chanting: ‘Choly! Choly! Choly!’ Haynes smiled at the Errol Flynn-mustached Gaston and dared him do the impossible.”

“Three seconds later, the Globetrotter’s toothy smile was replaced by shock and horror as the Cagayan Cyclone did the improbable by swiping the ball away as the jam-packed coliseum erupted into cheers.”

“Indeed, Choly Gaston was quite a sight to behold in and out of the court remembered many who were at the school at that time." 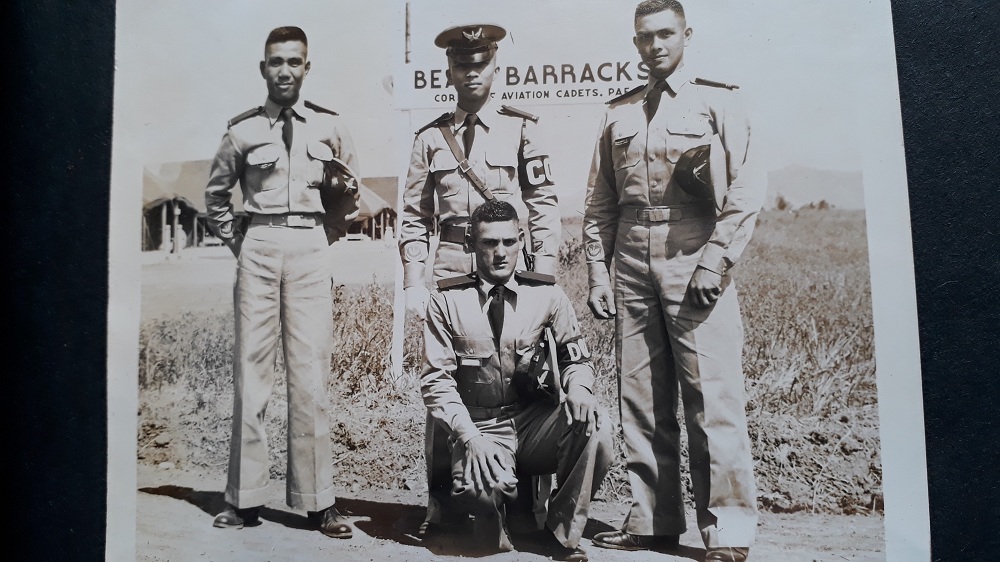 Choly Gaston (sitting) with some fellow PAF Aviation Cadets at Lipa Air Base (later renamed as Fernando Air Base). Photo courtesy of the Gaston Family.

“He was like this larger-than-life character despite his small size,” said Moying Martelino. “He had this movie-star mustache and would drive to school in the chopper (motorcycle) that made him look really cool.”

“Despite being the smallest one on the court, he was certainly one of the most exciting,” chipped in Poch Estella. “Choly would sky to collar those rebounds and his zigzagging through less agile defenders for a deuce that would bring the crowd to its feet.

“Tremendous athleticism that young man,” added Estella who helped set screens for Gaston to puncture the hoop. “The moment Choly stepped onto the court as a Blue Eagle, he was a superstar.”

Tragically, Choly died when he was but 26 years old when, as a newly minted pilot of the Philippine Air Force, his P-51 Mustang nicknamed “Blue Eagle King” crashed when it was bumped by a plane piloted by a wingmate during an aerial exhibition at Floridablanca, Pampanga on May 5, 1956. 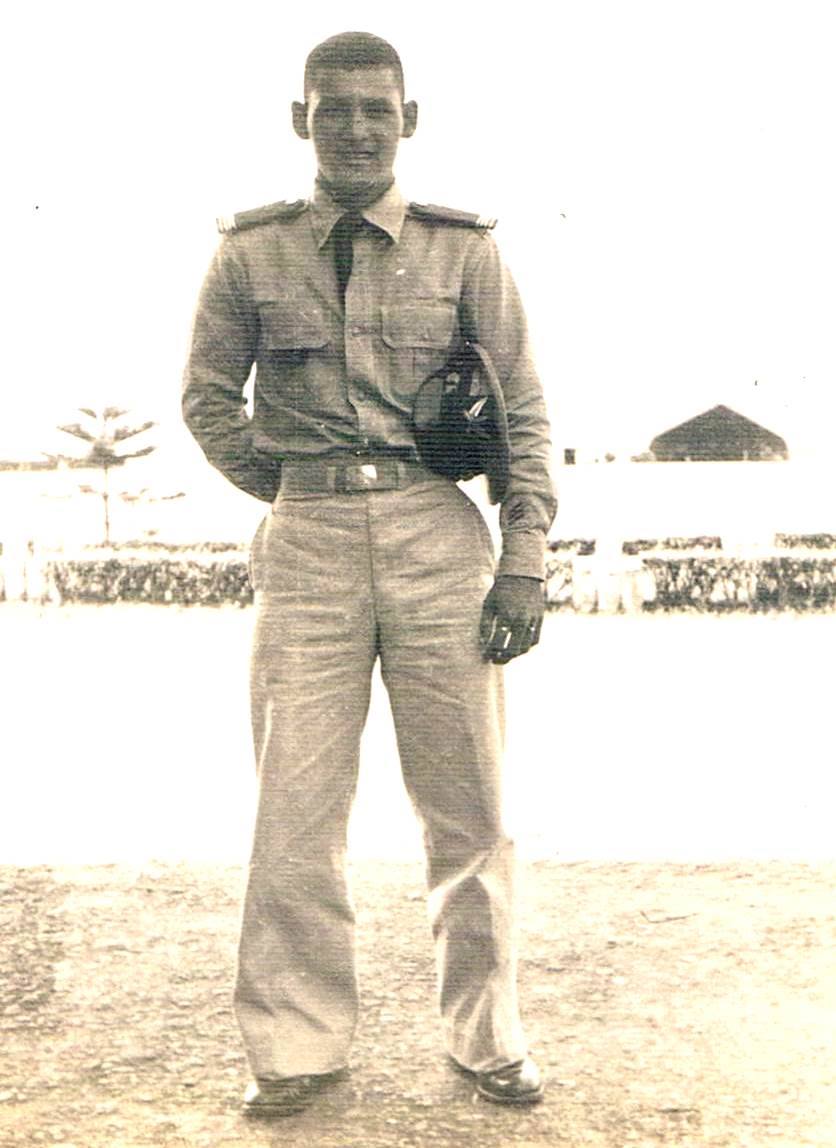