University Presidents and representatives of the 9 universities in Mindanao virtually gathered for the Turn-over of Book Donation Online Ceremony by the Consulate General of the People's Republic of China in Davao on January 20, 2022 at 10:00 o’clock in the morning via Zoom. The 9 universities are: 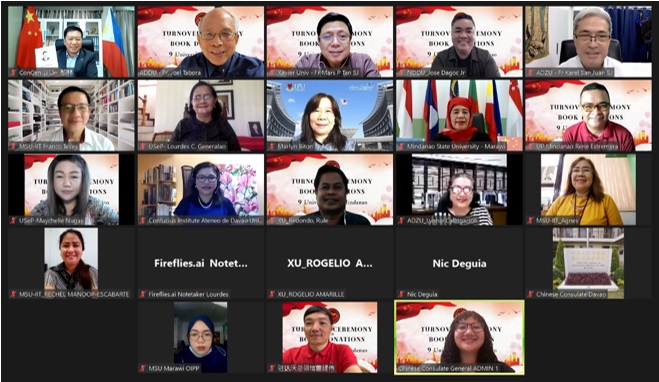 The program started with an introduction and brief rationale of the activity. It was followed by a formal hand-over of book donation and an opening message from the Consul General Li Lin. Moreover, messages from the university presidents and representatives were also highlighted during the event.

The book donation is an assortment of various subjects focusing on Chinese economy, philosophy, culture, science, history, sports, and others, which will hopefully enrich university students’ knowledge and understanding about China. This gesture of goodwill is a good start to promote bilateral cultural and educational exchanges between China and Mindanao and establishes a partnership between the Consulate General and the Xavier University-Ateneo de Cagayan and the rest of the universities in Mindanao.