As normalcy from the pandemic begins its effect, the Cultural Center of the Philippines returns to entertain the masses with the beloved playwright’s festival, The Virgin Labfest. With next year’s celebration, an XU fresh graduate is given the opportunity to showcase their talent in playwriting through his written work.

VLF continued its yearly programming by showcasing past productions online when the pandemic began last 2020. And with the recent announcement made, the festival is coming back on stage once again for its 18th year. Virgin Labfest, established in 2005, is an annual playwright’s festival wherein untried, untested, and unstaged works of chosen playwrights are showcased. The celebration has become an avenue of supporting theatre by developing new works from up-and-coming playwrights nationwide.

During the previous school year, one of XU’s theatre companies – The Xavier Stage authored “E-Cademy” which was a series of online workshops for it’s members that helped cultivate the art of theatre during the pandemic. The Xavier Stage is a resident repertory theatre company of Xavier University – Ateneo de Cagayan that mounts productions that promote Filipino culture and the arts as well as contribute to the growing development of theatre in the country. A product of the said program was a playwriting workshop conducted through the mentoring of a prominent Filipino playwright, Mr. Maynard Manansala, last August 29 – September 21, 2021. Mr. Manansala is a writer and professor at the University of the Philippines. He is known for his works in the arts, specifically his works in Philippine theatre. He wrote plays such as “Tao Po” performed at the CCP (2017) and Fringe Festival in Melbourne, Australia (2018), “Valedictorian” performed at the Pink Shorts Festival, held at the Teatrillo Casa Manila, “Dalawang Gabi”, “Juan Tamad” and many other works in different mediums.

Jules Pamisa, a fresh AB Psychology graduate of Xavier University and a well-known artist from The Xavier Stage, was able to create his written work entitled “Mga Halimaw Din Kami” as his workshop output for “E-cademy: Playwriting Workshop”; and last Jul 10, 2022, it was announced through the official Virgin Labfest Facebook page, that his work is curated in the festival’s 18h edition.

Jules Pamisa began his theatre work with The Xavier Stage in 2016. An XCCA performing arts company scholar and now a full resident artist of the company, he has served in various capacities, such as stage manager in multiple productions, human resource officer, vice president during the S.Y. 2020-2021; he is an actor as well as a director. Notable performances are William Shakespeare’s A Midsummer Night’s Dream at the Luce Auditorium at Siliman University and The Xavier Stage’s production of Dalawang Gabi at the XU Little Theatre. Furthermore, he won the Best Actor Award for his performances as Tony in TXS Creative’s Sonyeo Na Saag. He was also awarded the Breakthrough Male Artist Award in the Xavier Stage’s annual show awards last 2019. In addition, participated in PETA’s Writing for Performance Workshop last October 2020 and TXS’ E-Cademy with Mr. Maynard Manansala, and Sulat Dula 5: A Playwrighting and Dramaturgy Workshop in Mindanao last November 11- 13, 2021. He also served as the Writing Committee Head of The Xavier Stage. His recent work, Tuyok, was curated in The Xavier Stage’s second online season: I-halohalo. He graduated with a degree in Bachelor of Arts in Psychology at Xavier University-Ateneo de Cagayan last July 2022.

The Xavier Stage takes pride in its member’s achievement as this is not only an opportunity to celebrate arts and the theatre but also a celebration of one student’s talent and skill cultivated and molded through years of learning and hard work. 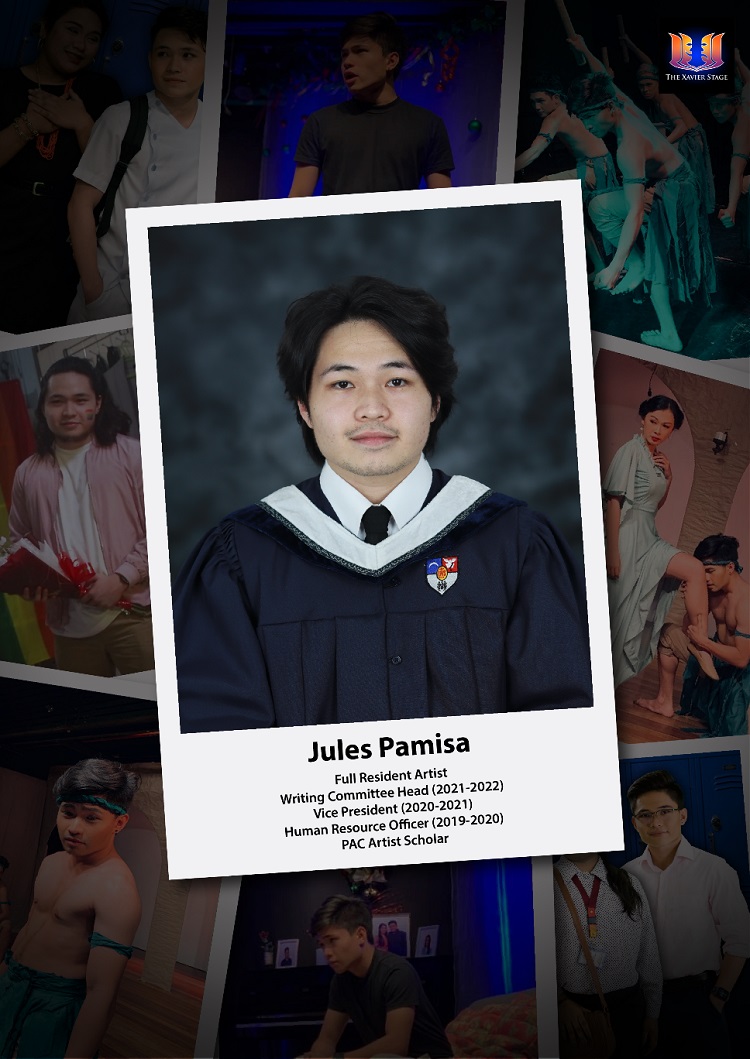