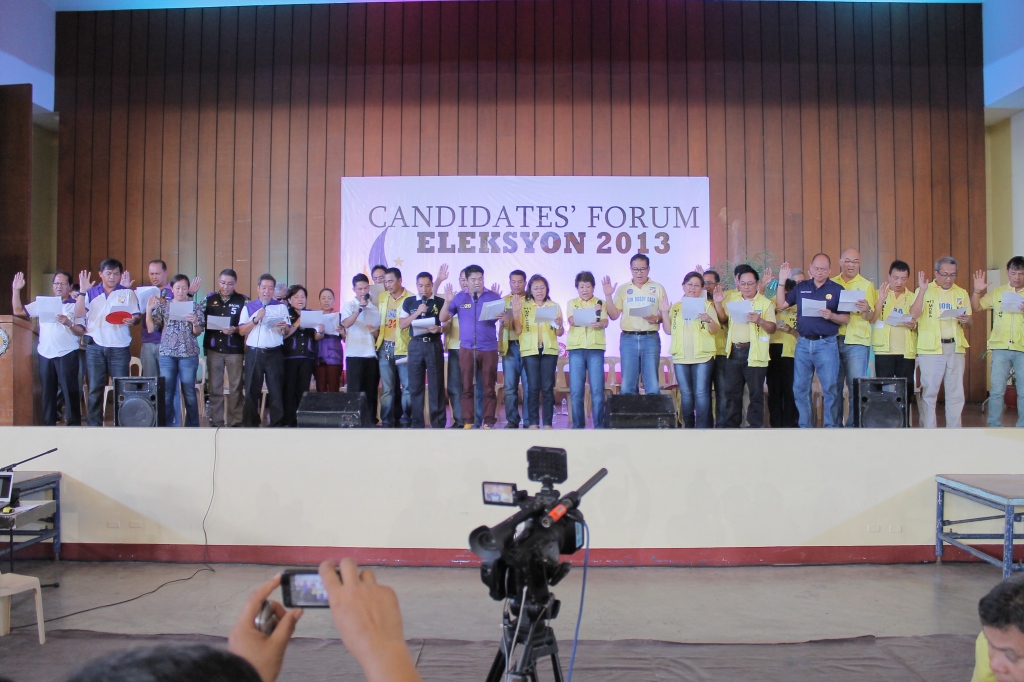 Conveying its agenda on food security, health and sanitation, environment, good governance and peace, Xavier University, with Capitol University, hosted a series of fora with the congressional, city legislative, and mayoralty candidates on April 26, April 30, and May 7, 2013 respectively.

The candidates were presented with the city’s most pressing issues and concerns as perceived by respondents of the survey done by the XU-Kinaadman Research Center.

Kristohanong Katilingban sa Pagpakabana – Social Involvement Office (KKP-SIO), the social advocacy arm of the university, incorporated these top issues and concerns into the People’s Agenda through flyers, leaflets, and “periodikits” distributed throughout the city for the electorate to consider in choosing their candidates in the May 2013 elections.

During these fora, the candidates were asked to consider the following People’s Agenda:

On good governance, the soon-to-be city public servants were asked to address the perceived corruption by city officials in its management of public funds, to construct a socialized housing project for the informal sector, to strictly implement and enforce with conviction and will the laws and ordinances to promote order and harmony in the city, and to create an Organized People’s Council in the City Council.
Agenda on the Environment include effective implementation of Republic 10121 or the Philippine Disaster Risk Reduction and Management Act of 2010 and the Republic Act 9003 or the Solid Waste Management Act, creation of a Comprehensive Cagayan de Oro Watershed Program and Water Management, and conduct of infrastructure audit.

On Health and sanitation, the candidates were asked to consider the improvement and effective management of JR Borja Hospital and the proper allocation of Government Budget for Preventive and Curative Medicine, to activate a functional City Health Board, and to implement public health policies.

To ensure the city’s food security, they were asked to consider the implementation of Household-level Backyard Vegetable Gardening, to create a Baranggay Level Food Security Council, and to establish Multi-sectoral Group to act as a Watch Dog on Food Security in the City Concil.

On peace and order, considering the city as “melting pot of Mindanao,” candidates were asked to consider the activation the City Peace and Order Council, support Police Visibility and Law Enforcement facilities, and Conduct Public Education on Safety and Security.

These issues and concerns based on the university’s thematic agenda were responded to by the candidates based on their performance and alternative solutions.  At the end of each forum, the candidates shook hands and made a promise to work for clean, orderly, and honest elections.

"What is striking and positive about the agenda-based fora is that the candidates, in their public appearances, are now talking about the city's issues and concerns based on KRC's research and KKP's Focus group discussions,” said Engr Ermin Stan B Pimentel, KKP Director. “After the elections, the challenge is how these agenda will be carried by the next set of leaders, which will be the focus of the Good Governance and Political Leadership Program of the University.”

XU President Fr Roberto C Yap, SJ, emphasized that the hosting of these fora is the manifestation of the “university serving society.” He also indicated that  the research was conducted “in the hope that the results will be used by the candidates in making their plans and by voters in choosing their leaders.”

Other than its partnership with Capitol University, the three candidates’fora were made possible through the VP - Research and Social Outreach Office (VP-RSO), Governance and Leadership Institute (GLI), Kristohanong Katilingban sa Pagpakabana – Social Involvement Office (KKP-SIO),  The National Citizens Movement for Free Elections (NAMFREL), Crusaders for HOPE, Kagayanon for Good Governance (KGG), and most especially, the KKP Volunteers.