(The following are the official results of the second pre-election survey conducted by the Kinaadman Research Center of Xavier University, and released by the University Communications Office.)

Xavier University’s Kinaadman Research Center has released the official results of the second phase of its survey on voters’ preference for local candidates conducted from Apr 24-28. In contrast to the Center’s pre-poll survey in February, results of last month’s survey show that as Election Day approaches, majority of Cagayan-anon voters have already decided on their candidates. 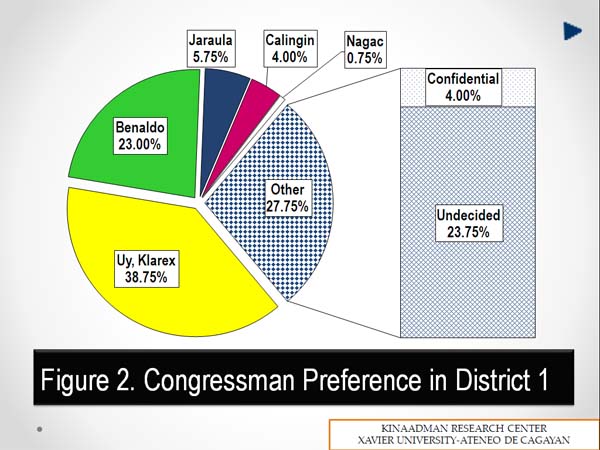 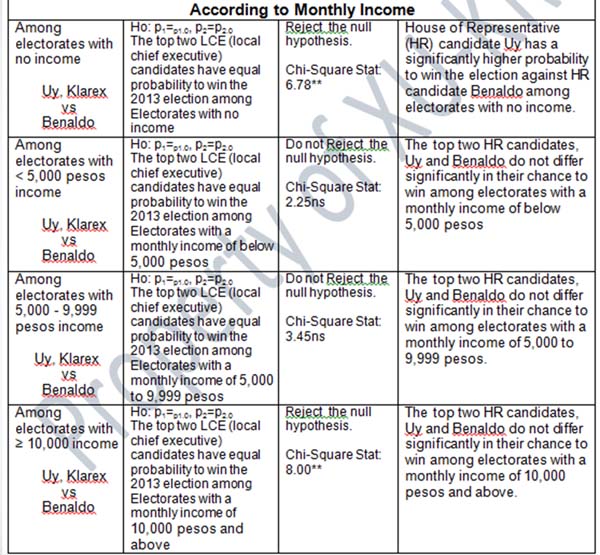 In the 2nd District, incumbent Rep Rufus Rodriguez continues to dominate, rising slightly 2 percentage points from 63 percent in the previous survey to 65 percent. His challenger Ian Mark Nacaya’s figures climbed from 3.33 percent to 8.75 percent. Undecided voters now account for only 17.75 percent compared with the previous survey result of 33.67 percent. 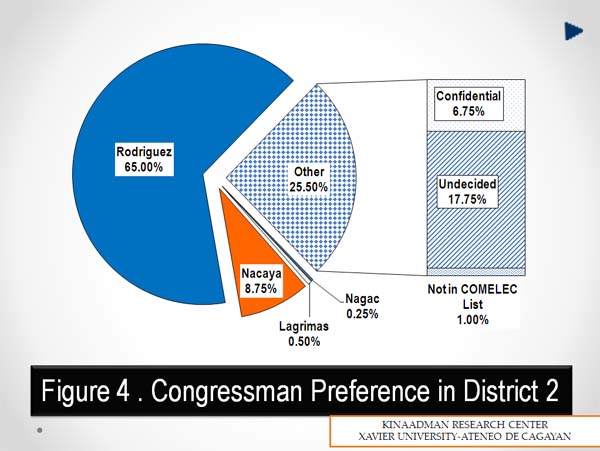 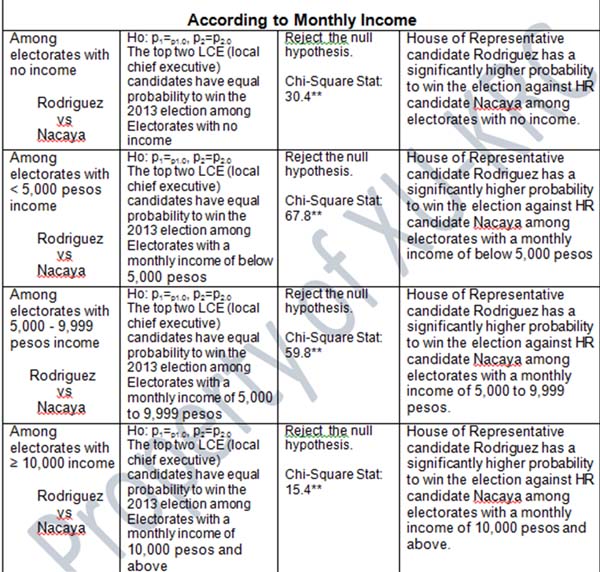 The race for mayor is still a close call. Mayor Vicente Emano retains his lead with 41.50 percent, 7 percent higher than in the last survey, while Misamis Oriental Gov Oscar Moreno trails behind with 31.75 percent, more than his previous percentage of 27.67. Voters who remain undecided dropped by about half from 37.17 percent to 18.38 percent. When classified by district, 41 percent of voters surveyed in the 1st District chose Emano over Moreno who got 33.25 percent. In the 2nd District, more voters still favored Emano (42 percent) more than Moreno (30.25 percent). 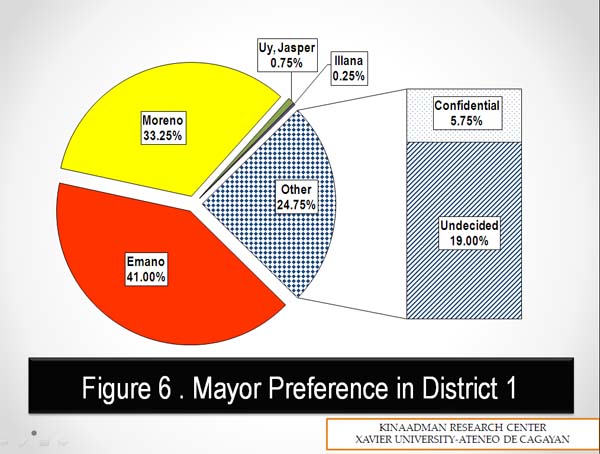 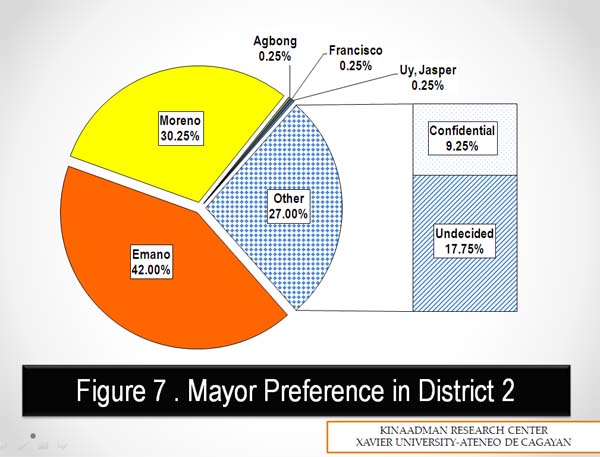 Survey results for vice mayorship leaned toward the incumbent. Ian Acenas remains the strongest contender, improving his ratings from 31.83 percent to 41.25 percent. City Councilor Ed Cabanlas followed far behind with 19.25 percent, but an improvement of about 7 percent from the previous poll. However, a good percentage of voters are still undecided, from 54.67 percent in the last survey to 31.13 percent. 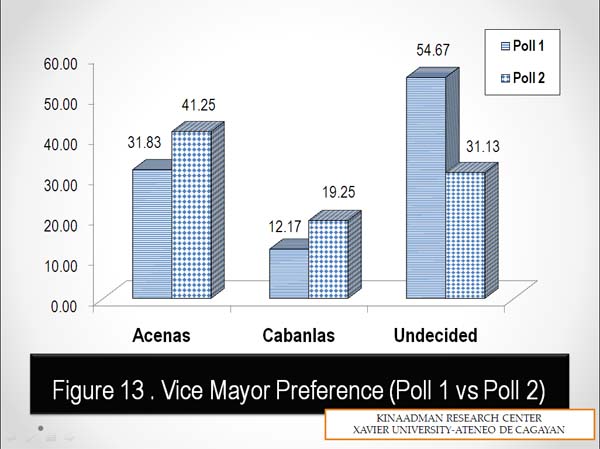 Acenas leads in the 1st District with 42.75 percent of votes over Cabanlas who earned 19.5 percent. In the 2nd District, voters still strongly preferred Acenas (39.75 percent) to Cabanlas (19 percent). In addition to voters’ preference, respondents of the survey were also asked their basis for choosing their candidates. The top 10 reasons that emerged were Personal Qualities, Project Implementer/Action Oriented, Pro-people/Makimasa, Plans/Platform, Intelligence, Influence of Relatives and Friends, Party Member/Supporter, Personal Preference, Desire for Change, and No Choice. 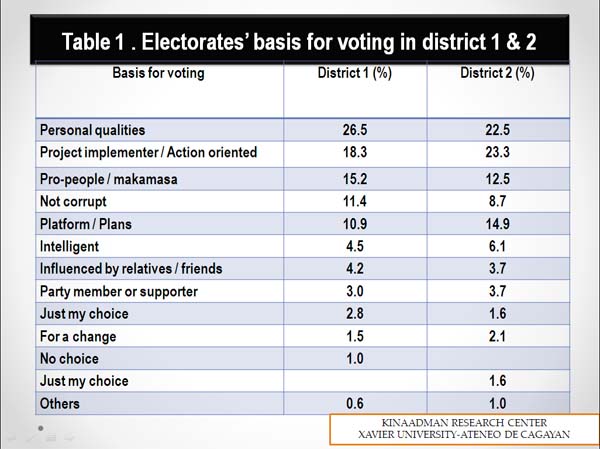 The survey results are based on interviews among a sample of 800 adults, 400 respondents taken from each district, with a margin of error of +/- 3 percent. Barangays were selected using probability sampling proportionate to size, while the respondents were chosen using systematic random sampling. Funding for the study came from Xavier University.