The legend narrates that once upon a time, there was a dark and brutish giant in the South named Makeyvakey who fell in love with a mortal. Enticed with the beauty and grace of the native, Makeyvakey used his godly powers to make the woman reciprocate his fondness and emerging love. 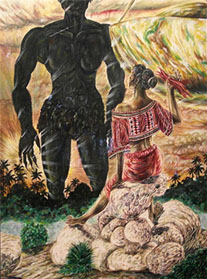 This is the story behind “The Seduction of Makeyvakey” (1983) by Albert “Bet” Vamenta, one of the paintings depicting the mystique and darkness, monsters and heroes of Mindanao folklores hanging on the walls of Museo de Oro at Xavier University in Cagayan de Oro City.

Museo de Oro, dubbed as the first folkloric museum in the country, is not an abode of dead things. It is, by all means, bursting with life, clad with vivid imagination and rich history.

Through the artifacts and works of art displayed in its three exhibit rooms, rediscovering the 47-year-old “Museum of the South” promises a worthwhile and creative experience for the literati, artists and museum-goers alike.

The man behind the Museo

The inception of the Museo began in August 1967 when its founder, Fr Francisco Demetrio SJ, conceived a dream of building a place to accommodate historical and archaeological items and would showcase the traditions and folklores of Mindanao.

Fr Frank, as he was fondly called by his friends and colleagues, started collecting during his travels and study excursions. His humble collection back then comprised the Museo’s exhibit during its infancy period.

Due to the astounding progress of the collection, which used to be known as Xavier University Folklife Museum had to expand and from there, it acquired its present name as Museo de Oro.

The Museo currently has three major collections—The Ethnohistory of Northern Mindanao, The Ethnology of Mindanao and Fr Francisco Demetrio SJ Gallery—forming a pivotal repository of culture, arts, and knowledge to understand the past of the second-largest island of the Philippines.

“After how many years of wishing and waiting for Museo de Oro to have a new facelift, it has finally come to a realization,” Dr Erlinda Burton, the curator of Museo de Oro said in her message during the grand launching of the revamped museum on September 27.

Dr Burton also expressed her gratitude and thanks to the administration of XU especially to the former president Fr Jose Ramon T Villarin SJ who supported the initial plan to renovate the Museo and to Fr Roberto “Bobby” C Yap SJ, the present university president, for pushing through the refurbishing.

Numerous guests and visitors packed the Museo during its launching, paving a way to make the Museo as one of the top local destinations in Northern Mindanao for domestic and foreign tourists.

Among the artifacts showcased in the first exhibit room were fossilized remains of the Stegodon found in Laguindingan, Misamis Oriental, archaeological materials dug from the Huluga Cave in Taguanao and Tagbalitang Cave in Villanueva, MisOr, which date back from the late Iron Age (300BCE to 1000CE) and religious paraphernalia during the Christianization period in Mindanao.

Relics from the Spanish, Japanese, and American periods are also displayed in the first exhibit, including the charcoal sketches and watercolor paintings of Joaquin and Vicente Elio from Mambajao, Camiguin. Don Vicente Elio was a classmate of our National Hero Jose P Rizal at the Ateneo de Manila.

Having the most number of indigenous people (IP) communities or lumads, Mindanao also offers a diverse mix of heritage, fashion, and traditional tools.

The Ethnology of Mindanao room exhibits ethnographics of different Islamized and non-Islamized lumad communities on the island, including their musical instruments, pieces of jewelry used by men and women, vibrant textiles, weaponry, and the brass-crafted ornaments of the Meranao.

Imposing at the entrance of the second exhibit room is a painting portraying the myths of the creation of ethnic groups pertaining to the creation of the universe and humankind.

“He [Fr Demetrio] also dreamed of having a research center which is for learning about Mindanao studies and its colors for students to make use of its materials for research,” said Dr Burton, who has worked with the celebrated paleoanthropologist Dr Louis Leakey of the National Geographic.

Fr Demetrio first conceived the Museo to become a repository of the rich cultural heritage of Mindanao for its presentation and preservation for posterity.

In the second level of the newly-renovated Museo located the gallery for contemporary exhibitions.

Fr Demetrio's collection of myths and narratives came to life in the portrayals and works of art of local artists over the years.

The paintings of resident artists Bet Vamenta and Pennsencio “Nonoy” Estarte depicting the folklores of Mindanao hang on the walls of the Fr Demetrio Art Gallery, known as Pag-uswag (Progress) retrospective exhibit.

These artworks—varying from cosmology, the fusion of animal and human, epics, and other stories—were done when the two local artists were still under the guidance of the founder of the museum.

After the demise of Fr Demetrio in 1996, the Museo has remained open to local and international artists.

Another addition to the gallery was the memorabilia section of the museum’s founder, showcasing his photographs, news and magazine clippings, and awards, including a numismatic collection.

One of the prized assets of the museum is the rare copy of the French dinner menu (French carte de jour) during the ratification of the Declaration of Independence during the Malolos Congress on September 29, 1898.

The precious menu designed by Arcadio Arellano details the food and drinks served during that special evening of our nation’s history.

The Museo only displays the menu, now with an English translation beside its glass case, on special occasions.

More than ever, the Museo has intensified its preservation and archival efforts through digitization of the pertinent yet susceptible historical documents such as the 1898 French carte de jour, copies of 1940s newsletter Commonweal, paintings about Mindanao folklores and many others, including some 1800s baptismal and death records (in Spanish) of Camiguin which were salvaged after the eruption of Mount Hibok-Hibok.

Museo de Oro aligns its raison d'être to be the heart of history and cultural formation in this part of the country and a structure engaging the Filipinos of the present generation to appreciate and look back to our roots, a fundamental fragment in understanding our present and, nevertheless, our future.

As Fr Demetrio said on the April 14, 1971 issue of The Manila Chronicle: “For these beliefs and customs gathered all over the archipelago are but concrete manifestations of the cultural themes and basic assumptions that underlie Philippine life and culture. And it is imperative to know this if our concrete plans for development will not prove abortive.”∎

The entrance fee to Museo de Oro is Php 70.00 for adults and Php 30.00 for students and children. The museum is open from Monday to Saturday.