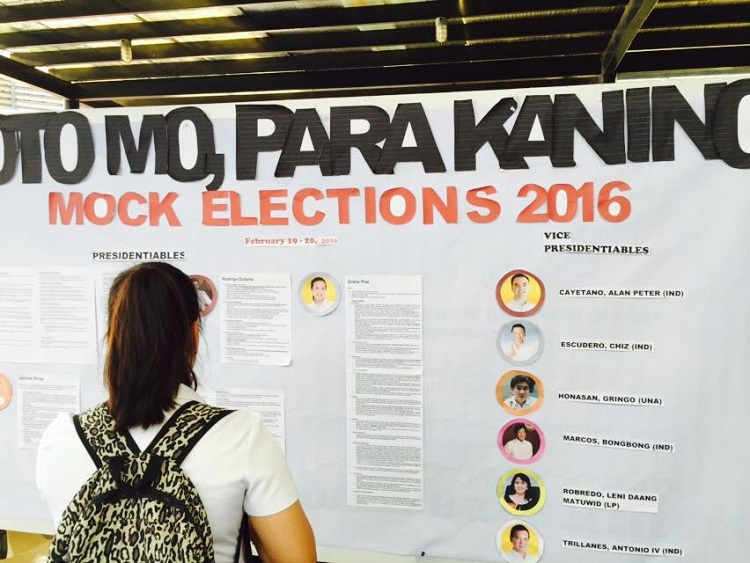 [The following are the official results of the mock election organized by the Kristohanong Katilingban sa Pagpakabana – Social Involvement Office (KKP-SIO) through the LIHUK 2016 Network (Lambigit Igsoon alang sa Hiniusang pag-Uswag sa atong Katilingban) in collaboration with the Central Student Government Electoral Commission, and released by the University Communications Office.]

Mock election results for city mayor reveal incumbent mayor Oscar Moreno (LP) as the top choice with 42.93% of votes. Rufus Rodriguez (CDP) is in second place with 36.41%. Vicente Emano (Padayon) ranks third with 10.85%.In fourth and fifth places are Ric Saarenas (Ind) and Felix Borres Jr (Ind) with 1.12% and 0.21%, respectively. Respondents who voted “none” account for 8.40%.

The mock elections aimed to advocate among the electorate the need to do more research on the profile of candidates. It also hoped to foster the desire for active participation, and open and critical pursuit of the truth, as well as help build the political maturity of the electorate in XU.

The activity was held from 8AM to 7PM in two venues identified as mock precincts: XU Peace Park and Faber Hall Lobby. It made use of an electronic voting system designed by the Central Student Government Electoral Commission. It was open to all XU college and post-graduate students, faculty and staff. A total of 1,428 members of the XU community participated in the mock elections. This represents approximately only 10% of the total population at the main campus. Of the total voters, 60.50% are COMELEC registered. An analysis of the voting behavior of this sub-group reveals an almost similar voting pattern.