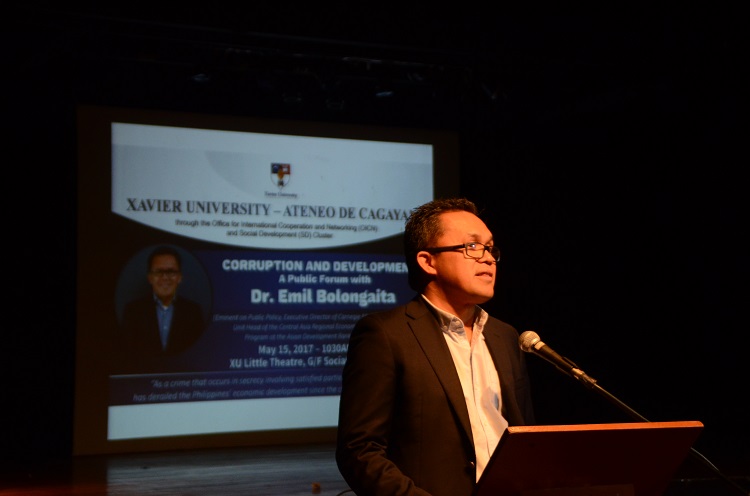 CORRUPTION AND DEVELOPMENT. Dr Emil Bolongaita, a Distinguished Service Professor of Public Policy and Management of Carnegie Mellon University, says in a forum at Xavier Ateneo, that institutional reforms are "critical to removing the corrupt in government and the private sector and establishing the foundation for clean government."

Report and photo by Alex Belen

Dr Emil Bolongaita, a Distinguished Service Professor of Public Policy and Management of Carnegie Mellon University in Pittsburgh, USA and the executive director of the university’s campus in Australia, defines grand corruption as “a corruption that involves the legal or illegal manipulation of laws, policies, regulations, and procedures that result in the theft or diversion of sizable public assets for private benefits.”

In a forum at the Xavier University - Ateneo de Cagayan Little Theater on Monday, May 15, Kagay-anon and XU alumnus Bolongaita related two stories: the first one was when he was working in an international development project on the rule of law in Manila and the second story was when he served as an advisor to a high-ranking government official.

The first story was when Bolongaita was studying the Bureau of Customs, specifically the Port of Manila and the Manila International Airport. They were to make a time series analysis study on the new post-entry audit system consisting of an inspection-free green lane, the randomly-inspected yellow lane, and the 100% inspected red lane. The point of the study was to find out what was the variance in the time to process shipments across these three lanes in the two ports.

Normally, one would expect that the inspection-free green lane would be the fastest, but when the results of the study came out, everyone involved was stunned. In both ports, it was not the green lane that was the fastest but the red lane.

The second story was when Bolongaita was an advisor to a top-ranking government official who was the authority on a certain development project. There was a consortium of international and domestic businessmen who were making an unsolicited proposal to construct the project.

After several meetings and discussions, a Memorandum of Understanding was signed between the consortium and the official. After the signing, however, Bolongaita was approached by the consortium, and they asked him, as Bolongaita said that they then proceeded to ask “what Mr So-and-so wanted” in exchange for the project.

The official was not to be swayed, despite repeated attempts to have his hands greased. “Just do the project,” he said, every time he was asked what he wanted. It impressed Bolongaita, but frightened the consortium. They remarked about how strange it was for it has “never happened in the Philippines before.”

One Filipino representative even said, “This is like going into a movie house without a ticket.”

“Both stories involved huge amounts [of money]. Those are examples of grand corruption, involving high-ranking officials, involving sizable amounts of money,” said Bolongaita at the end of the last story, and then went on to describe the level of corruption in the Philippines as “palpable.”

In one segment, he quoted French philosopher Voltaire who once said, “Behind every fortune lies a crime.” Bolongaita continued that Voltaire's line is “very true about many fortunes found in the Philippines.”

Corruption is a concept that is inseparable from our everyday life. He said, we can encounter it on the streets or in the halls of our institutions, but no other type of corruption has far-reaching consequences quite like grand corruption. It is so deeply rooted into the Philippine society today because of the events leading up to our current situation. This applies to other countries, too.

Professor Bolongaita singled out Singapore, Indonesia, and Hong Kong for comparison to our country, as these three provided invaluable insights as to why and how we, as a country, got here.

So why these countries specifically? Currently, Singapore and Hong Kong are the least corrupted countries in this current day and age. Indonesia was chosen as it is similar to the Philippines in many ways; both are among the most corrupt countries in the world, according to Corruption Perception Index 2016.

Each country has had its own tribulations. In the years that followed Senator Ferdinand Marcos campaigning to become President, the fortunes of all four countries rose and fell, leaders were ousted and new ones were installed, and different outcomes came of combating corruption within the country.

Beginning in the 1960s, each country had its own anti-corruption agencies. Each agency had a differing level of effectiveness depending on how it was run and who was running it. Singapore had the Corrupt Practices Investigation Bureau (CPIB), Hong Kong had the Anti-Corruption Branch (ACB), and the Philippines had the Presidential Agency on Reforms and Government Operations (PARGO.) Indonesia had no agencies at the time as it was in the midst of a coup d’état, in 1966.

Cut to the early 2000s and the numbers of all four countries in regards to convicting government officials for grand corruption. Corruption, in order to keep it in check, should become a “high-risk and low-reward” activity, and not the reverse. Hong Kong and Singapore both have this as the secret to their success for being among the least corrupt countries in the world. Nonetheless, many government officials do not get away with their crimes, no matter how prominent they are.

However, the same cannot be said for our own country. Ever since the passing of RA 7080 or the Plunder Law, in 1991, there have only been 13 cases of plunder so far, only six of which have been concluded, and of those there were only two convictions. The first one was former President Joseph Estrada. The second was a cashier from the Bureau of Internal Revenue (BIR). The former was pardoned a month later by his successor President Gloria Macapagal-Arroyo, while the BIR cashier was sentenced to life imprisonment.

This is not even getting into the more recent cases of corruption (the late former Chief Justice Renato Corona, former AFP Comptroller Major General Garcia, and Senator Juan Ponce Enrile who is “too old and frail to be imprisoned”).

Contrast with the Indonesian institution called the KPK (the Corruption Eradication Commission) which has a conviction rate of 99.9% or 612 out of the 614 cases from 2004 to 2016. These cases involved Indonesia’s prominent names and large sums of money.

Currently, President Rodrigo Duterte vows to eradicate corruption through his imposing, iron-fisted ways. But a strong will is not enough to root out corruption, Bolongaita said during the forum. The reason why the Philippines is so mired in its own mistakes is because we do not have the appropriate tools to weed out the grand corruption from the country.

PH’s Office of the Ombudsman does not have the stellar track record compared to Indonesia’s KPK, Singapore’s CPIB and Hong Kong’s ICAC (Independent Commission Against Corruption) because it is not equipped to investigate and prosecute the way the three other agencies can.

Bolongaita puts it best with this: “Political will and leadership will not matter if there are no tools to get the job done. The President cannot bring down a concrete wall with his fist, no matter how strong his punch is. To paraphrase former Ombudsman Sonny Marcelo: ‘You cannot kill an elephant with a flyswatter.’”

Political will, as Bolongita concluded, will be found wanting if it does secure the necessary tools. Among his recommendations are for President Duterte to support Ombudsman Conchita Morales’s call for amendments to the laws that would give the Ombudsman strong investigative powers and to augment the Ombudsman’s resources as well as those of other law enforcement agencies so then can restructure its staff and recruit and retain more qualified personnel.

"These institutional reforms are critical to removing the corrupt in government and the private sector and establishing the foundation for clean government. President Duterte must demonstrate that he will be prepared to let the rule of law apply to everyone, including the President. As the late Singapore PM Lee plainly said: 'Leaders must be prepared for such scrutiny keep the system clean. We have to keep our own house clean. No one else can do it for us.'"∎

This forum was organized by jointly organized by the Xavier Ateneo Social Development cluster and the Office of International Cooperation and Networking. Dr Emil's Bolongaita's current research focuses on grand corruption and financial crimes. He was formerly the unit head of the Central Asia Regional Economic Cooperation Program (CAREC) at the Asian Development Bank (ADB) and a public management specialist in ADB’s South Asia Department. Prior to ADB, he was a technical director of Management Systems International, a consulting firm in Washington, DC, specialising in governance and anti-corruption projects. He also worked as director of the World Bank’s Global Distance Learning Program on Anti-Corruption in Asia-Pacific. He has been a isiting professor at the Elliott School of International Studies at Georgetown University, an assistant professor of public policy at the National University of Singapore, and assistant professor of development management at the Asian Institute of Management.