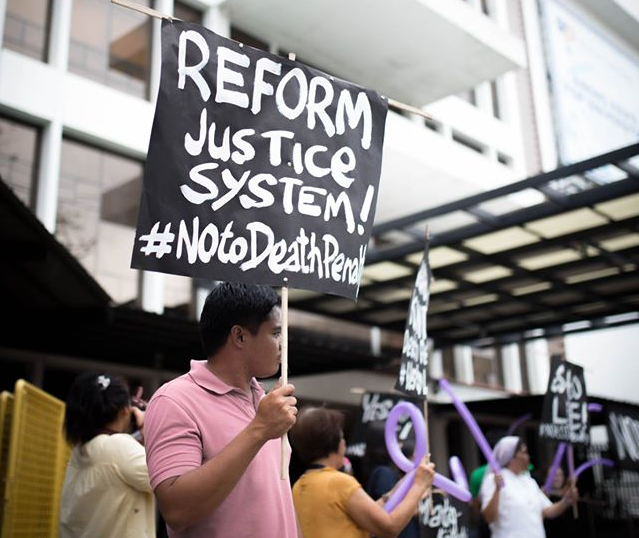 'NO TO DEATH PENALTY.' Xavier Ateneo group opposes the reimposition of death penalty in the country, calling it as "a wanton disregard for life." File photo by Carlo Pailagao.

Xavier University – Ateneo de Cagayan joins the chorus of the leaders of premier Philippine colleges and universities in their call for restorative justice instead of the reinstallation of death penalty in the country.

In a memorandum released on May 15, Xavier Ateneo president Fr Roberto C Yap SJ expressed the Jesuit university’s steadfast indignation against the proposed punishment to be legalized which could perpetuate false accusation and deprive the accused of human rights.

Endorsing an open letter petitioned by fellow university and college presidents, deans, and professor addressed to senators, Yap expressed his support for the movements against the capital punishment’s revival.

“We are tasked to strengthen even more our commitment to the ethical values and principles that we inculcate in our education system,” he said.

“To say that life is sacred, no one, not even the state, should have the power to be able to take the life of a human person, no matter how grave the offense is,” he drummed based on the principles of the Catholic academic institution.

Letter to the senators

The open letter reinterated Article II, Section 11 of the 1987 Philippine Constitution which states, “The State values the dignity of every human person and guarantees full respect for human rights.”

The letter enumerated six points which argued the penalty as an ineffective solution to address the rampant criminality in the country. Among them was the capital punishment’s failure to curb drug-related offenses in selected countries as presented by the Global Commission on Drug Policy’s 2016 Report.

As one of the current administration’s priorities, measures to combat drug epidemic encouraged the House of Representatives to approve House Bill 4727 last March after its third and final reading with 217 voting for “yes,” 54 for “no,” and 1 abstention.

Despite its abolition in 2006, hearings for the reimposition of the death penalty will proceed to the Senate in the succeeding days, but the letter appeals to senators, seeking to reconsider their stand.

Along with its arguments, the letter cited that the penalty “may be detrimental for the country’s ethical culture.”

“To bring back capital punishment is to lose our collective humanity as a people,” the letter added. “We are called to promote a culture of life and respect for human dignity.”

Although Xavier Ateneo took a stand against the capital punishment, some members of the community adhered to an opposing view.

However, photographs of the protest circulated on social media, particularly on Facebook, with varied reactions and comments – some of which coming from Xavier Ateneo community members who disagreed with the university’s stance.

In a recent incident, a paper was plastered anonymously on a banner displayed by the Social Development cluster at the front of the Magis canteen. The paper covered the word “not” in the tagline “Execution is NOT the solution.”

XU Senior High School instructor Jim Bastida Akut II, who discovered what one commenter labelled as an act of vandalism, posted photos of the banner with the paper on Facebook on May 17.

“XU made a stand plainly because it is an institution,” he defended in one reply to a comment. “The institution does not in any way bend their values and principles just because the community is not in consensus.”

However, he encouraged those with opposing views to speak up and not resort to vandalizing the objects of the stance. “We always allow a space for dialogue,” he replied to another enraged commenter. “We allow space for conversations.”∎

The online petition against the reimposition of the death penalty is available here.