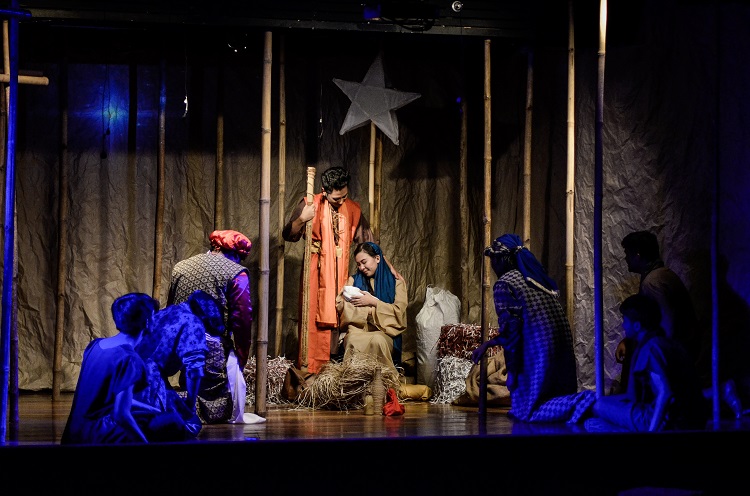 THE NATIVITY. Mary cradles the newly-born Jesus in her arms as Joseph takes guard. The family is visited by the Three Wise Men from the east and shepherds from the nearby fields in Bethlehem. The Nativity has been one of the most iconic scenes during the Christmas season.

Review by Angelo Lorenzo
All photos by Marco Villanueva

Christmas celebrates the birth of Christ. While the Gospels of Mark and Luke in the New Testament chronicle this story from the Annunciation to the Nativity, it has become the centerpiece and inspiration for magnificent and remarkable works in literature, art, film, and contemporary culture.

Linda Manalo’s adaptation, performed onstage by The Xavier Stage on December 14 and 15, 2017 within Xavier Ateneo’s Little Theater, did not veer from the narrative of the source material. Instead, it reflected the perennial societal ills that had plagued the generations before, during, and after Christ’s birth, some of which still exist in present day.

“This is the greatest story of all time,” the promotional article stated, “for God so loved the world that He gave His only begotten Son.” 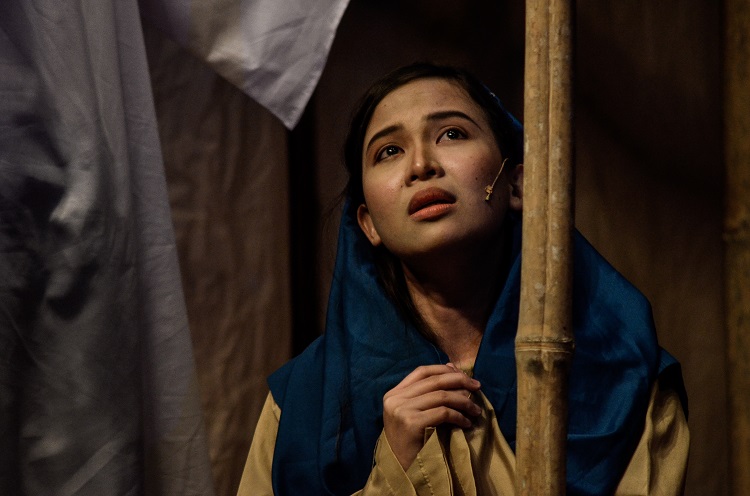 The aspect of God’s love

Panunuluyan is part of TXS’s Aspects of Love series for the university’s academic year. The series presents plays written and adapted by local playwrights. But apart from the theatrical eroticism in German Gervacio’s Babuyan Island or the marital love affair in Bonifacio Ilagan’s localized adaptation of Bertolt Brecht’s A Respectable Wedding, Manalo took on a more spiritual route, with TXS treading the holy ground.

The poignant story of God’s plan for humanity’s salvation is revealed by the birth of Christ, His life, and ministry, to His death, eventual resurrection, and glorifying ascension.

But Panunuluyan centers in the events that surrounded His birth: the wise men’s journey to solve the mystery beneath the brightest star in the sky; Angel Gabriel’s revelation to Zachariah to announce Elizabeth’s pregnancy despite her age (their son will eventually be known as John the Baptist who became the prophet that baptized Jesus on the Jordan River years following His birth), the same revelation the angel gave to Mary to become the mother of the Messiah; Joseph and Mary’s betrothal; Mary’s visitation to Elizabeth; Joseph struggling to accept his betrothed’s pregnancy which eventually came to terms when Gabriel explained to him that it was the will of God; and the peak where Joseph and Mary sojourn to Bethlehem where they were denied places to stay before the infant Christ was born.

Other points included the wise men’s decision not to return to King Herod to relay the news of Christ’s birth after the tyrannical monarch was threatened by the fulfillment of the Jewish prophecy – the coming of the King of kings, which would challenge his authority.

All these events comprise “the greatest story ever told.” Greatest, because its account has existed long before William Shakespeare staged the forbidden romance of two star-crossed lovers, and before Charles Perrault first penned the rags to riches tale of a maiden who won the heart of a prince by being the fairest damsel in the ball. This narrative, however, entails God’s divine intervention by His deity in the flesh personified by Jesus Christ to become the atonement of sins; the Creator among His creation, the life-giver among the living. 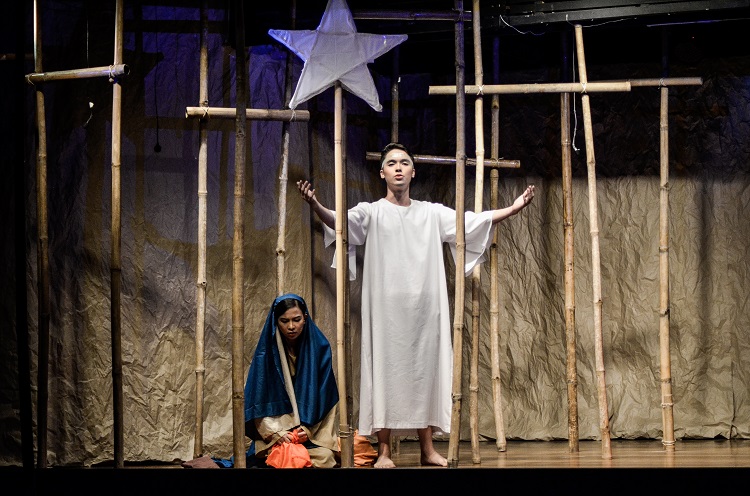 THE ANNUNCIATION. Angel Gabriel reveals himself to Mary to announce the Immaculate Conception in which the Son of God becomes flesh by the power of the Holy Spirit in her womb.

Although Manalo’s Panunuluyan incorporates the local language to suit the understanding of the audience (composed mostly of Xavier Ateneo students who speak Bisaya and Filipino), the themes, based on Biblical accounts, remain the same. The unquestionable and boundless love of God resonates in the gift of family, the pursuit of survival and life, and the destruction of social norms, imposed upon by authority and tradition.

The value of family is among the central themes of the play. This was seen when Mary cradled the infant Christ in her arms as Joseph took watch beneath the stable in the presence of the wise men, the shepherds, and their flock, and Gabriel hours after the virgin mother gave birth. But before they arrived in Bethlehem, they journeyed after Gabriel relayed God’s command for the couple to leave Mary’s hometown so they could escape unharmed from the penalty that would endanger her life. In that era, women who were discovered pregnant before marriage were stoned to death. God’s guidance in their struggle to live also played a major role.

But the most striking message was love’s defiance against the dictates and common belief of the society. With God, it can transcend rules, defy expectations, and perform wonders. Mary’s immaculate conception was an example of these wonders, and Joseph carrying the responsibility despite his family’s indifference was a testament to love that involves sacrifice.

Social ills such as displacement (of Joseph and Mary due to the penalty), the prejudice caused by stigma in the case of Mary’s pregnancy before marriage, and the economic disparity between the rich and the poor with King Herod’s authority unquestioned are still prevalent in the present day, and have become detestable issues that plague people from various cultures and belief. The displacement of Rohingya Muslims due to the alleged ethnic cleansing in Myanmar has not only caused turmoil among the innocents in the community but also risked a number of lives. Religious minorities have become marginalized due to the horrors committed by the actions of a few. Extremely fundamental nationalism has divided countries all over the world.

The birth of Christ may be celebrated annually during Christmas, but this moment in His life portrayed by the play was a prelude to the greatest manifestation of God’s love – from the manger to the cross.

Although the definite date of His birth was not officially stated in the Biblical passages, there is a reason why contemporary Christmas is set near the end of the year. The universal celebration’s origin may stem from the roots of the Yuletide festival in ancient Scandinavia or the pagan ritual in Rome before the empire adapted Christianity as its religion, incorporating Christ’s Birth on December 25 provides the time of the year – besides the Holy Week – for reflection. It is a time to reflect and be reminded of what God did more than a thousand years ago. To remember His birth is to also recollect about what God can do out of love – wonders beyond mortal reason. 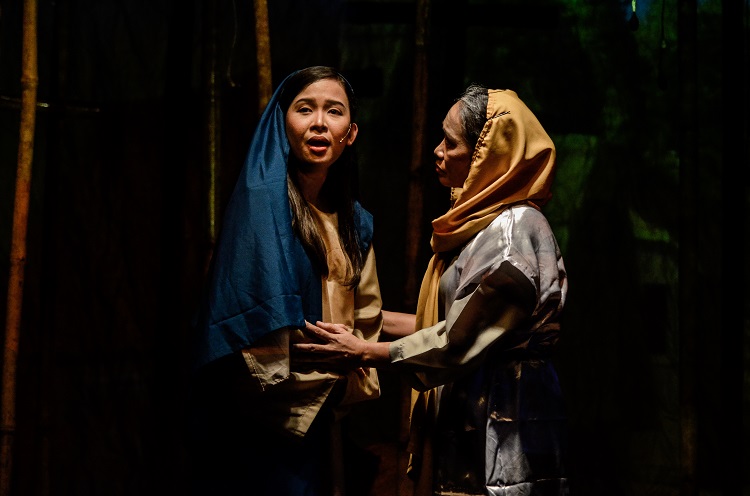 THE VISITATION. Mary visits her cousin Elizabeth after hearing the good news. Elizabeth would eventually become the mother of St John the Baptist, the prophet who announces the coming of Christ before His baptism in the Jordan river years after.

The play marked the last theatrical production of TXS for 2017. Its two-day run starred Xavier Ateneo Senior Highschool student Hian Lao as Joseph and Xavier Ateneo alumna Danikka Fabela as Mary, among the many outstanding and brilliant line-up of the cast. It was directed by Hobart Savior [also the Xavier Center for Culture and the Arts (XCCA) director] and was presented by Xavier University, Office of Mission and Ministry, XCCA, and the National Commission for Culture and the Arts.

“This Christmas, we appreciate the greatest gift given to us,” Savior noted in his speech after the play. “This play will help us deepen our faith in Christ.”

He also shared that this was the first time that TXS has produced and performed a play related to the Nativity Story, dedicating it to the Advent Season. For three years now, TXS has been producing Ang Pasyon ni Hesukristo during the Season of Lent.

Apart from the localized language, the production also incorporated designs inspired by Filipino culture. On the stage, bamboo sticks stand to represent the structures of the places where the plot revolved – the Jewish temple where Zacharaiah encountered the Angel Gabriel, Herod’s throne room where the king invited the wise men to inquire about their tidings, and the iconic stable in Bethlehem.

As part of TXS’ Aspects of Love series, it will be followed by the twin bill production of Luna Sicat’s Dalawa and Maynard Manansala’s Dalawang Gabi next year.∎ 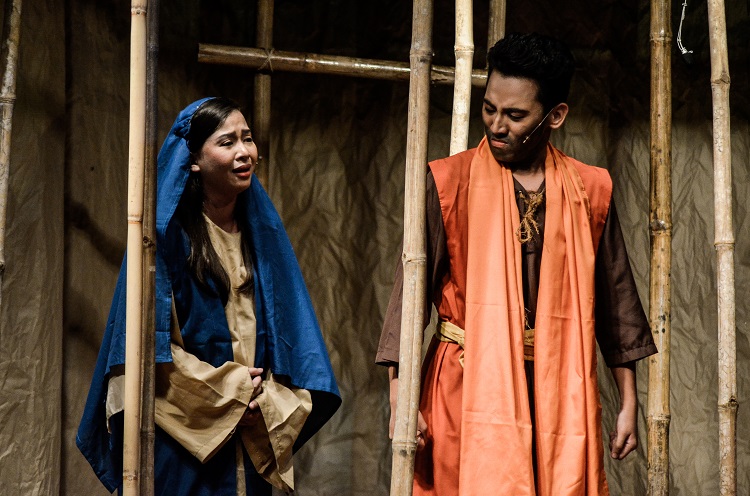 TORN BY DISBELIEF. Mary tries to reason out with Joseph after discovering her sudden pregnancy.