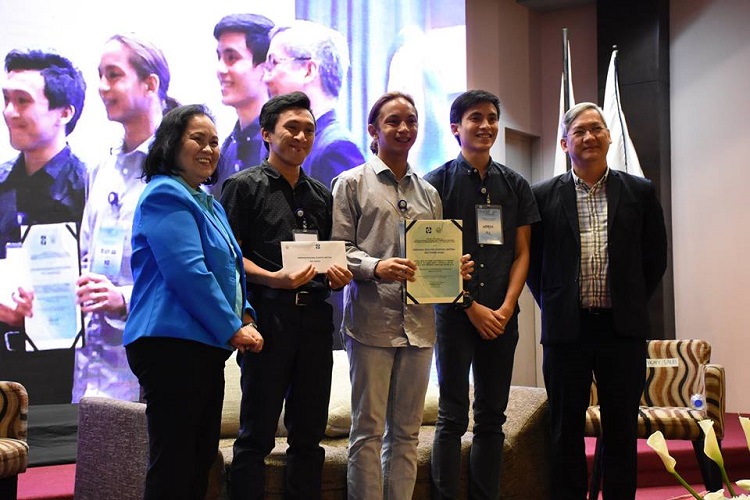 BEST POSTER AWARD. Xavier Ateneo Civil Engineering students (L-R) Dan Salimbangon Cabahug, Ray-An Yray, Aeron Jan Sy Cezar, Nikko James Clarete Veronilla, and Jason Co (both Veronilla and Co are not in the above picture), under the tutelage of Dr Gerardo Apor and Engr Dex Lo, win the Best Poster Award at the the Mindanao Regional Scientific Meeting, jointly organized by the Department of Science and Technology (DOST) and the National Academy of Science and Technology (NAST). Photo courtesy of NAST Philippines.

The winning team from Xavier Ateneo was under the tutelage of College of Engineering’s Dr Gerardo Apor and Engr Dexter Lo.

Their study essentially showed that hundreds of residents are “potentially at risk to rain-induced landslides” around Carmen Hill, a part of Carmen, the most populated barangay in Cagayan de Oro City.

The student researchers used the Simplified Bishop Method to calculate the “Factor of Safety” against slides. LiDAR-based Digital Elevation Models were then used to extract the topography of the study area. Soil samples were also taken from the field and subjected to “Triaxial Compression Laboratory Tests” to determine the geotechnical properties of the soil.

These parameters were then modeled in more than 50 cross sections using the “GeoStudio Software” to simulate the behavior of the slopes under given rainfall conditions. Future rainfall scenarios from downscaled climate change projections were also simulated in the models. Maps were then generated using the ArcGIS software.

Following the objective of their study — to develop high-resolution slope stability maps against rain-induced landslides on Carmen Hill — the results of their study were put in maps to indicate the near-exact locations and presented to the local government and residents to help them assess the risk and plan for mitigation and preparedness strategies.

In addition, based on the models developed in their study, the onset of climate change may also exacerbate the potential impacts of landslides in the area.

This suggests that for urban development to be truly resilient and sustainable, it is now imperative for climate-enhanced and risk-sensitive land use plans to be instituted and implemented.

On the slopes and foot of Carmen Hill also lie hundreds of formal and informal settlements, and this rapid development in the area is challenged by risks to landslides, especially during heavy rainfall events. In January 2009 and January 2017, portions of Carmen Hill collapsed, causing property damage and transport paralysis.

The Civil Engineering department of the College of Engineering congratulated the winning team and considers this achievement a part of advancing their research excellence towards crafting engineering solutions to societal challenges.

Their study was in line with the focus of the 2018 Mindanao Regional Scientific Meeting, the United Nations-led Sustainable Development Goals (SDGs), particularly on SDG 6 (Clean Water and Sanitation), SDG 11 (Sustainable Cities and Communities), and SDG 15 (Life on Land).∎ 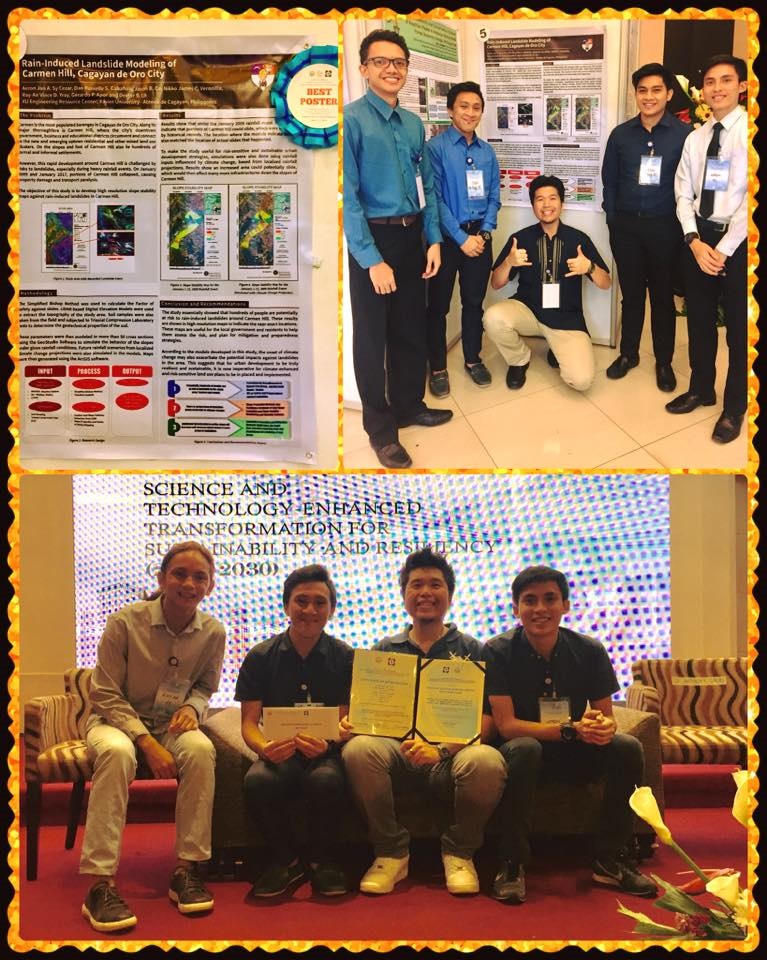