Ang Pasyon ni Hesukristo: 'I have saved you, I have died for you'

Photos and words by Angelo Lorenzo

Around the world, believers of the Christian faith commemorate Jesus Christ’s death and resurrection during the Holy Week. Mass and church services preach the Gospel of salvation – the central message that encompasses Jesus’ role as the savior of sinners.

In theater, Linda Manalo’s "Ang Pasyon ni Hesukristo" takes on a localized language, but with the same narrative and themes that gave life to the Gospels. Conveying the same message, The Xavier Stage presented the play for the fifth time as part of the company’s annual tradition during Lent. This year, performances ran from March 28 to 29 at the XU Little Theater. 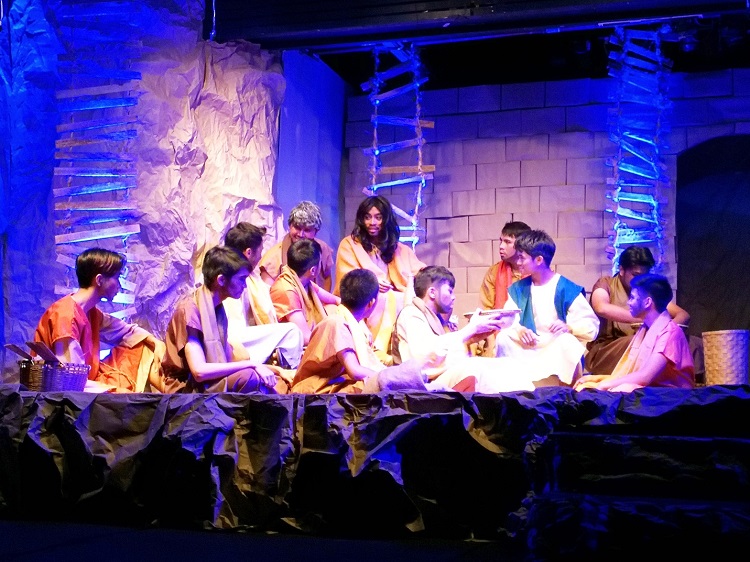 THE LAST SUPPER. Jesus, portrayed by John Roel Cabana, dines with His disciples for the last time before His arrest.

The stage production may have been styled differently from other versions of the play, but the grief portrayed in Jesus’ death by crucifixion and the hope for salvation in His eventual resurrection stayed true to the source material – in both Manalo’s play and the Gospels.

The narrative took place in Jerusalem, where Jesus (played by Xavier Ateneo Business Administration student John Roel Cabana) had spent His last few hours before He was crucified. But unlike the chronological accounts in the gospel, the scenes transitioned in a non-linear structure. It opened with two believers conversing about the truth regarding Jesus’ resurrection and ascension, and led to a flashback of Jesus raising Lazarus from the dead – an emphasis of life after death in one’s belief of Him. 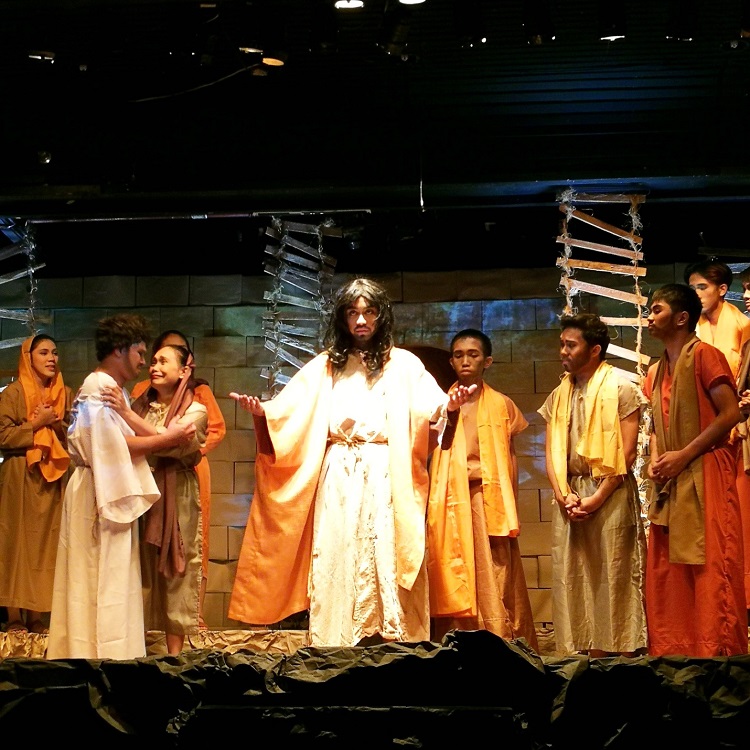 HIS MINISTRY. Jesus preaches to the crowd of God’s power to raise the dead back to life after He raises Lazarus.

While most of the significant events comprising the Station of the Cross occurred in the play, some of the flashbacks consisted of His miracles and His relationship with His followers. God’s redemptive plan was manifested through Jesus’ forgiveness and the succeeding acquaintance with Mary Magdalene (played by Xavier Ateneo's School of Business and Management faculty member Tracy Dy) after she sought refuge and repentance.

His relationship with His disciples further deepened when He cleansed their feet. However, two of these had been broken when Judas (played by recent Senior High graduate Hian Lao) betrayed and sold Him to the Pharisees, and Peter (played by Senior High faculty member Karl Butaslac) denied Him. 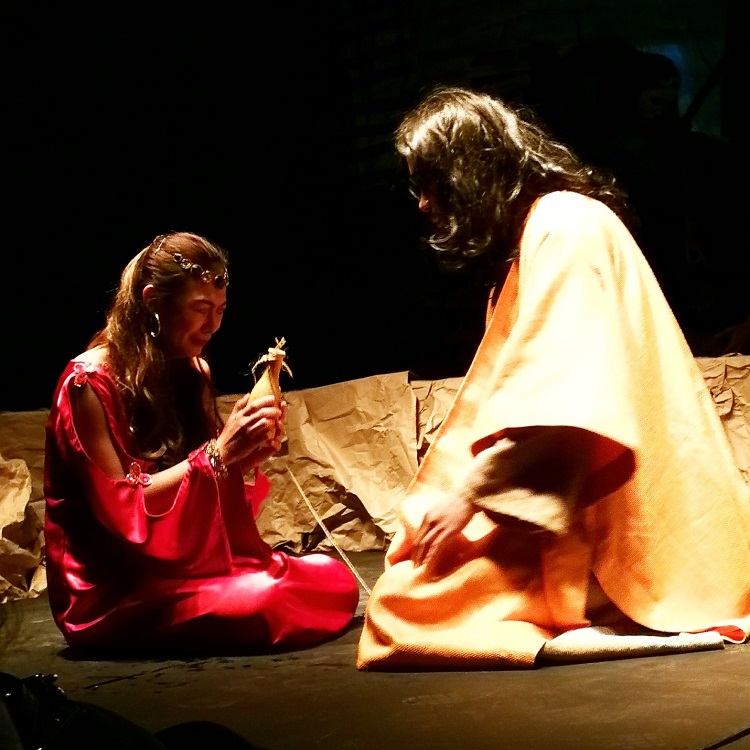 JESUS COMFORTS THE REPENTANT. Jesus comforts the repentant Mary Magdalene, played by Tracy Dy, after she sought refuge to Him.

Background music, most of which has been inspired by Middle Eastern instruments, played in some scenes where it complemented the dramatic tension. Peter’s denial would not have been biblically accurate if it weren’t for the rooster that crowed in one of its sound effects. Music, along with the vibrant lighting, aided in the transitions, and much of the space on the stage had been utilized. 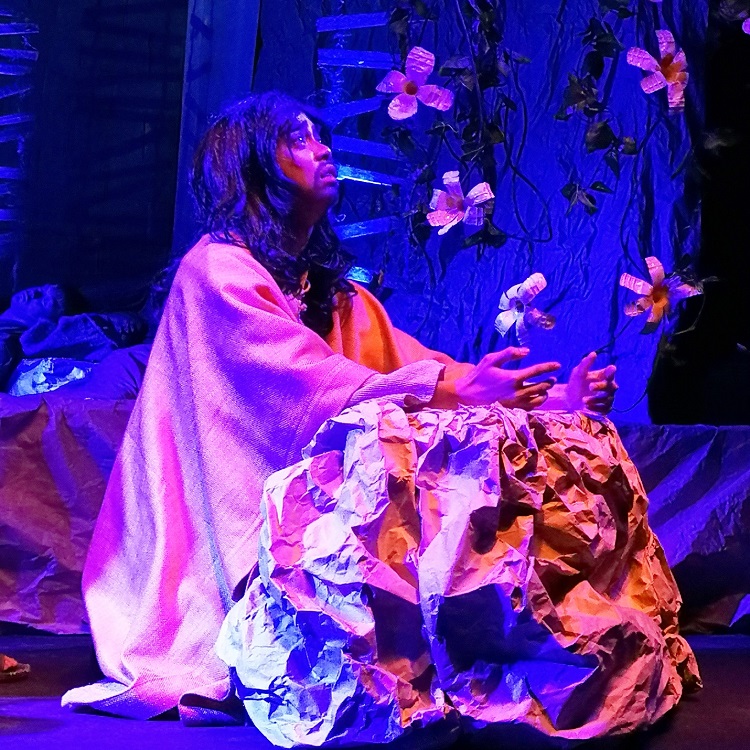 AGONY IN THE GARDEN. Jesus prays in the Garden of Gethsemane hours before His arrest, where He submits to the will of God.

Perhaps it is because of the seasoned directorship of Hobart Savior, also the director of Xavier Center for Culture and the Arts (XCCA), that revived the Christian-themed theater which appeals to university students and is accessible to the Xavier Ateneo community. Such phenomenon rarely occurs in Cagayan de Oro as religiosity manifests in the form of processions, mass and church services, and the traditional Visita Iglesia every Holy Week. 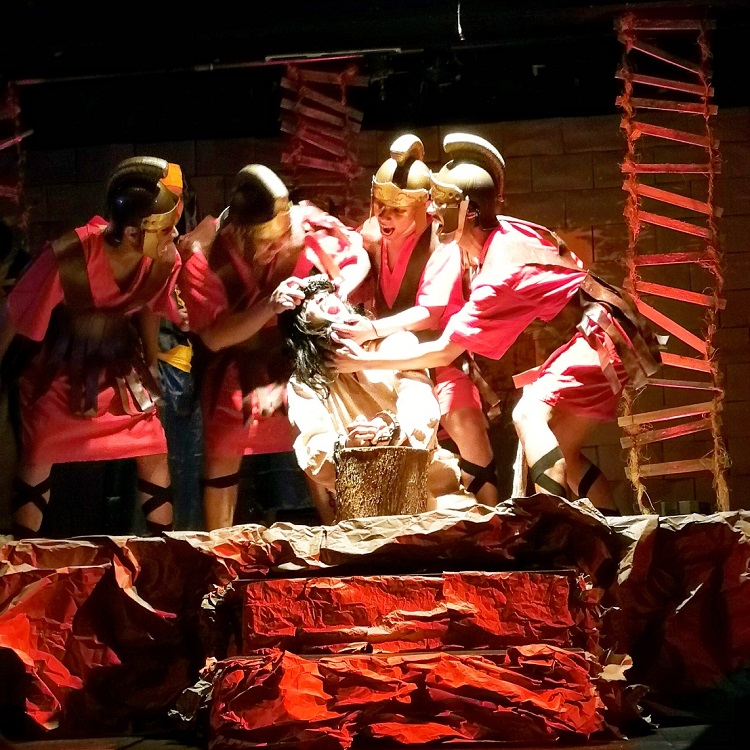 CROWN OF THORNS. Mocking Jesus’ divinity as the King of the Jews, Roman soldiers force Him to wear the crown of thorns after they scourged Him.

But the message of salvation, as well as Christ’s accomplished work on the cross, does not limit itself to places of worship and monuments of faith. With TXS staging the play for five years now, the good news can be revealed in the theater. 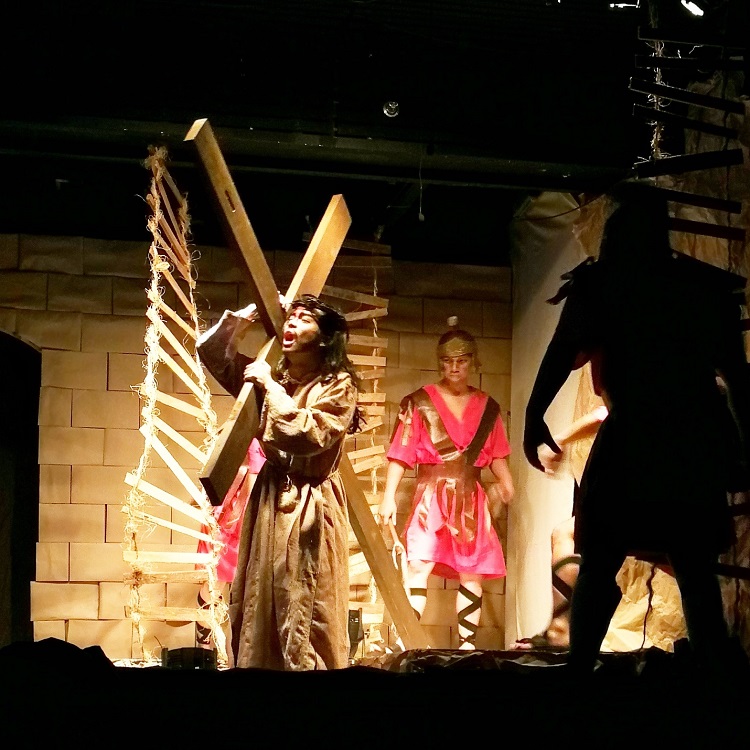 HIS CROSS TO BEAR. Jesus bears His cross on the way to Mt Calvary as Roman soldiers strike Him.

The talents of Cabana, along with many of the cast members, have also conveyed the message without compromising it for stylistic purposes. Savior even shared that this, along with the Linda Manalo’s "Panunuluyan" (which tells about Jesus’ birth), is one of the best plays they have been staging through the years. For the believers, the narrative of the Son of God saving the world through overcoming His death as payment for God’s forgiveness of sins is the greatest story ever told.

But what may truly strike the viewer most, whether one who has seen is a believer or a skeptic, is that the message resonates with the truth of a faith – God’s love exceeds expectations as His grace remains absolute. 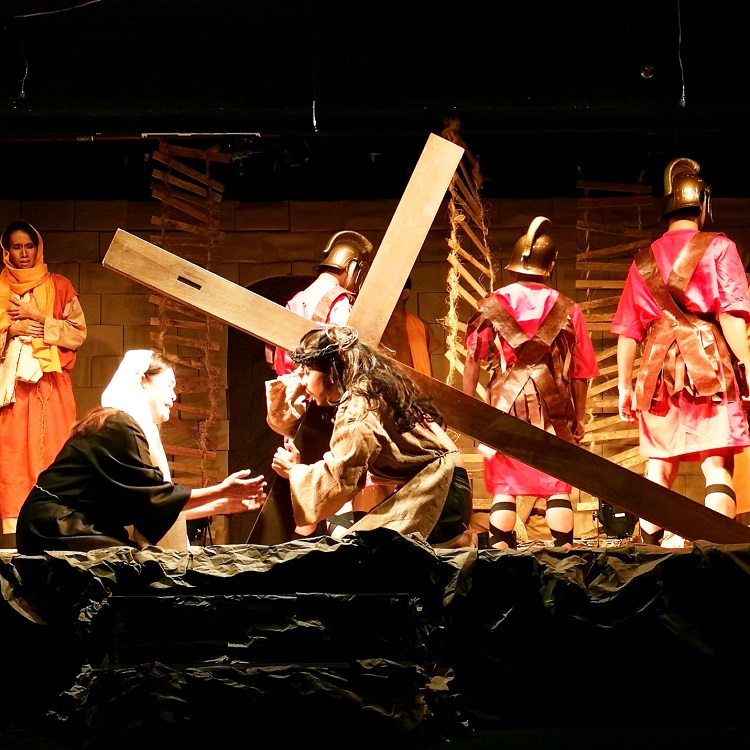 MOTHER AND SON. Mary attempts to comfort Jesus after He stumbles while carrying His cross.

“I have saved you, I have died for you,” Jesus said in a monologue during the play’s last scene.

“Do not be afraid to ask for forgiveness. I am with you until the end of the age.” Even as the run ended last week, the message lingers in the hearts of those who believe and keep their faith amidst life’s tribulations.∎ 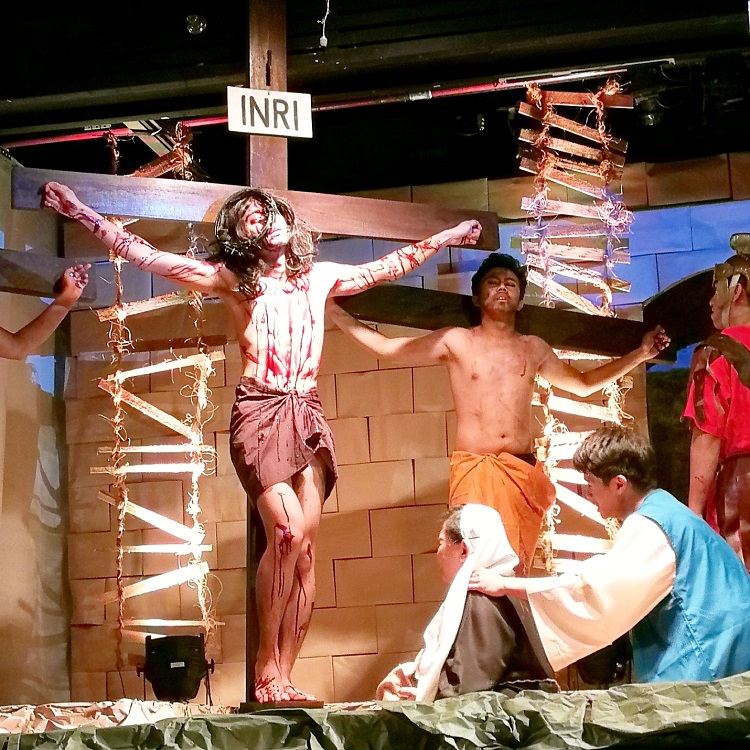 SAVIOR OF SINNERS. Jesus is crucified together with Dismas and Gestas. 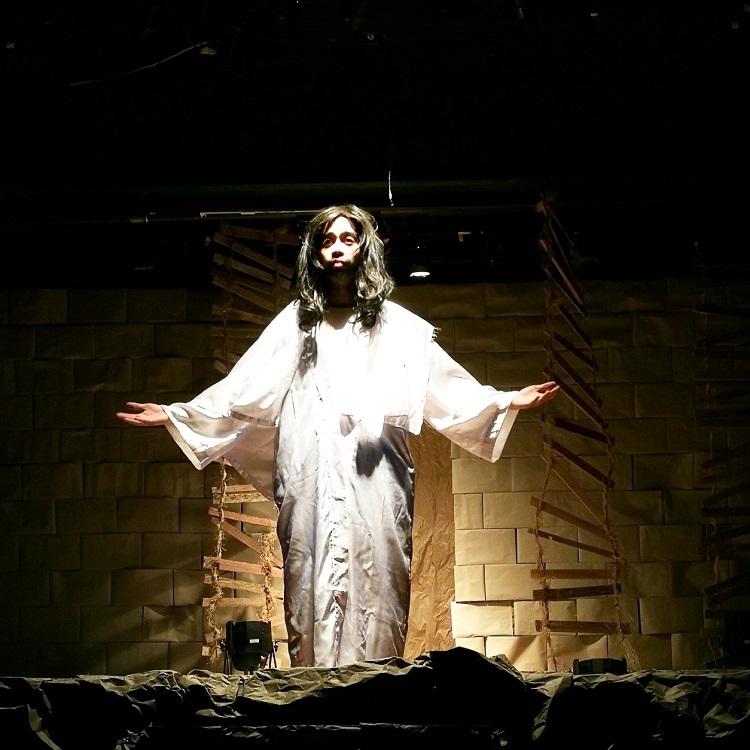 HE IS RISEN. Jesus speaks in His monologue about life after death in the belief of His resurrection and divinity.